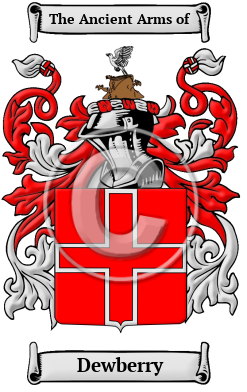 The Anglo-Saxon name Dewberry comes from when the family resided in the township of Duxbury, in the parish of Standish in the county of Lancashire.

Early Origins of the Dewberry family

The surname Dewberry was first found in Lancashire at Duxbury, a township, in the district chapelry of Adlington, parish of Standish, union of Chorley, hundred of Leyland. "Duxbury gave name at an early period to a family, of whom Adam, in the reign of Edward I., held a moiety of the town.'" [1] A later branch of the family was found in the township of Gransmoor in the East Riding of Yorkshire. There, W. D. Thornton Duesbery, Esq., originally of Skelton, near York is Lord of the Manor and he benevolently had a schoolroom built at his expense. [1]

Early History of the Dewberry family

This web page shows only a small excerpt of our Dewberry research. Another 59 words (4 lines of text) covering the years 172 and 1729 are included under the topic Early Dewberry History in all our PDF Extended History products and printed products wherever possible.

Before English spelling was standardized a few hundred years ago, spelling variations of names were a common occurrence. Elements of Latin, French and other languages became incorporated into English through the Middle Ages, and name spellings changed even among the literate. The variations of the surname Dewberry include Duxbury, Dewsbury, Dusebury, Dusbury, Jewsbury and others.

More information is included under the topic Early Dewberry Notables in all our PDF Extended History products and printed products wherever possible.

In the United States, the name Dewberry is the 8,491st most popular surname with an estimated 2,487 people with that name. [2]

Migration of the Dewberry family to Ireland

Some of the Dewberry family moved to Ireland, but this topic is not covered in this excerpt. More information about their life in Ireland is included in all our PDF Extended History products and printed products wherever possible.

Dewberry migration to the United States +

Dewberry Settlers in United States in the 17th Century