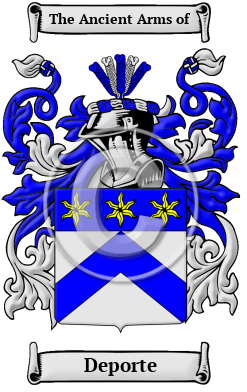 The Deporte surname comes from the Middle/Old English word "port," meaning "a harbor," or "market town" As such, the surname is thought to have been a topographic name for someone who lived near a port, or a market town.

Early Origins of the Deporte family

The surname Deporte was first found in Hampshire and Dorset. The family claim descent from Hugo de Port who came to England at the Norman Conquest and held fifty-five lordships in those counties. [1]

A Hubert de Port was also a tenant in capite in Hampshire as listed in the Domesday Book of 1086. [2]

Adam de Port or Porz (died 1213) was an English Baron, eldest son of John de Port and Maud, his wife, grandson of Henry de Port, lord of Basing in Hampshire. Adam reported to the exchequer in 1164, his father John being then alive, for about twenty-four knights' fees in Herefordshire. In 1172 accused of treason and of plotting the death of the king; he was summoned to appear before the king's court, disobeyed the summons, fled from England, and was outlawed. He seems to have returned to England at some point as he was fined three hundred marks for trespassing in the royal forests in 1176. He is said to have served the king in Normandy in 1194. [3]

From these early records, the family quickly scattered. "The church [of Upper Areley, Staffordshire], which is situated on an eminence commanding a fine prospect, was first built by Henry de Port, in the reign of Henry I., and was rebuilt in the time of Edward I." [4]

Another branch of the family was found at early times in Derbyshire. "The manor belonged to Welbeck Abbey, Nottinghamshire, in the reign of Stephen. It was given by Henry VIII., in 1540, to Sir John Port, Knt., one of the justices of the king's bench." [4]

In Devon, "Old Port, a very remarkable fortification of unknown antiquity, on the Erme, gave name to the De la Ports, and is suggested by Mr. R. J. King as of older date than Saxon times. ' It may have been the work of the Romans before their withdrawal ... or it may have been raised by some British King of Damnonia, working and building under Roman traditions, for defence against the Saxon host.' " [5]

Early History of the Deporte family

Outstanding amongst the family at this time was Sir John Port (c. 1480-1541), English jurist, born at Chester, where his ancestors had been merchants for some generations; his father, Henry, was mayor of Chester in 1486. In 1517 he was 'clerk of exchange in the Tower,' and in 1522 was made serjeant-at-law. His son Sir John Port (died 1557) was the first lecturer or scholar on his father's foundation of...
Another 70 words (5 lines of text) are included under the topic Early Deporte Notables in all our PDF Extended History products and printed products wherever possible.

Deporte migration to the United States +

Deporte Settlers in United States in the 19th Century

Deporte Settlers in United States in the 20th Century