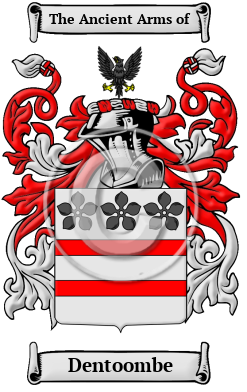 Early Origins of the Dentoombe family

The surname Dentoombe was first found in Northumberland where they the first record of the name was a considerable time before the Norman Conquest when Aelfweard Dentune held manor and lands in that county in 972. [1] However, they are also traditionally understood to be a branch of the Barons of Tatershall, descended from Eudo, a companion of the Conqueror. [2]

Early History of the Dentoombe family

Notable amongst the family name during their early history was Thomas Denton, English Member of Parliament for Leicester in 1407 and 1414; Thomas Denton (before 1515-1558), an English lawyer and politician, a Member of Parliament from 1536 until his death in 1558, who served as a politician for Wallingford (1536), Oxford (1539), Berkshire (1547), Banbury (April 1554), Buckinghamshire (November 1554) and Oxfordshire (1558); Sir Thomas Denton...
Another 65 words (5 lines of text) are included under the topic Early Dentoombe Notables in all our PDF Extended History products and printed products wherever possible.

Migration of the Dentoombe family