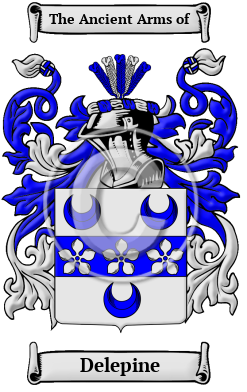 Early Origins of the Delepine family

The surname Delepine was first found in Limousin, where this noble family held a family seat since ancient times.

Early History of the Delepine family

This web page shows only a small excerpt of our Delepine research. Another 201 words (14 lines of text) covering the years 1241, 1598, 1789, 1807, and 1814 are included under the topic Early Delepine History in all our PDF Extended History products and printed products wherever possible.

Notable amongst the family was Jean Lespinasse of Pebeyre, the Lord of Pebeyre; and Louis Ellies du Pin, or Dupin (1657-1719), a French ecclesiastical historian, author of "Nouvelle bibliothèque des auteurs ecclésiastiques." Francesca Margherita de l'Epine, in spite of her French-sounding surname, appears to have been an Italian singer. From Italy she came to England with a German musician named Greber, and was often, therefore, called 'Greber's Peg' by the wits of the day. An advertisement in the 'London Gazette' (No. 2834), 1692, announces that the ' Italian lady (that is lately come over that is so famous for her singing)...
Another 153 words (11 lines of text) are included under the topic Early Delepine Notables in all our PDF Extended History products and printed products wherever possible.

In France, the name Delepine is the 1,847th most popular surname with an estimated 3,327 people with that name. [1]

Migration of the Delepine family