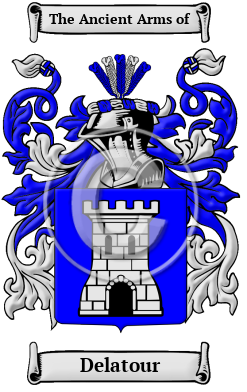 Early Origins of the Delatour family

The surname Delatour was first found in Languedoc, where this acclaimed family held a family seat since ancient times. Château Latour is a French wine estate, rated as a First Growth under the 1855 Bordeaux Classification. It lies at the very southeastern tip of the commune of Pauillac in the Médoc region to the north-west of Bordeaux.

Early History of the Delatour family

More information is included under the topic Early Delatour Notables in all our PDF Extended History products and printed products wherever possible.

Delatour migration to the United States +

Delatour Settlers in United States in the 19th Century

Delatour Settlers in United States in the 20th Century

Delatour Settlers in Canada in the 18th Century