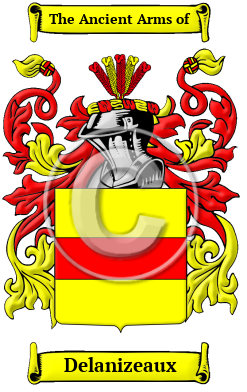 The surname Denis is one of the oldest family names to come from the French region known as Bretagne, or Brittany in English. It is derived from the Greek given name Dionysios, which means a follower of the Greek god of the same name. Much of the popularity of the name Delanizeaux is due to the fact that it was borne by the 3rd century Bishop of Paris who later became the patron saint of France.

Early Origins of the Delanizeaux family

The surname Delanizeaux was first found in Champagne, where this illustrious family held a family seat since ancient times. By the 14th century the family was well established in the region of Thiérache and several members of the family distinguished themselves through their contributions to the community in which they lived and were rewarded with lands, titles and letters patent confirming their nobility.

Early History of the Delanizeaux family

Throughout the course of history most surnames have undergone changes for many reasons. During the early development of the French language, a son and father may not have chosen to spell their name the same way. Many are simple spelling changes by a person who gave his name, phonetically, to a scribe, priest, or recorder. Many names held prefixes or suffixes which became optional as they passed through the centuries, or were adopted by different branches to signify either a political or religious adherence. Hence, we have many spelling variations of this name, Delanizeaux some of which are Denis, Dennis, Denys, Dennys, Denice, Denise, Deniset, Deniseau, Denison, Denisard, Denizot, Denizon and many more.

Notable amongst the family during this period was Claude Denis, Lord of la Cornillere, during the 1700's; Frans Denys (c. 1610-1670), a Flemish Baroque painter mainly of portraits; Jacob Denys (1644-1708) was a Flemish Baroque painter; Nicolas Denys (1598?-1688), a French aristocrat who became an explorer, colonizer, soldier and leader in New France, founder of settlements at...
Another 57 words (4 lines of text) are included under the topic Early Delanizeaux Notables in all our PDF Extended History products and printed products wherever possible.

Migration of the Delanizeaux family

In 1643, 109 years after the first landings by Cartier, there were only about 300 people in Quebec, in 1663 there were only 500, 2,000 migrants arrived during the next decade. Early marriage was desperately encouraged amongst the immigrants. Youths of 18 took fourteen-year-old girls for their wives. The fur trade was developed and attracted migrants, both noble and commoner from France. 15,000 explorers left Montreal in the late 17th and 18th centuries. Migration from France to New France or Quebec as it was now more popularly called, continued from France until it fell in 1759. By 1675, there were 7000 French in Quebec. By the same year the Acadian presence in Nova Scotia, New Brunswick and Prince Edward Island had reached 500. In 1755, 10,000 French Acadians refused to take an oath of allegiance to England and were deported to Louisiana. Meanwhile, in Quebec, the French race flourished, founding in Lower Canada, one of the two great solitudes which became Canada. Many distinguished contributions have been made by members of this family name Delanizeaux. It has been prominent in the arts, religion, politics and culture in France and New France. Amongst the settlers in North America with this distinguished name Delanizeaux were Mrs. Dennis, aged 35; settled in Philadelphia in 1820; Ann Dennis settled in Virginia in 1650; Daniell Dennis, aged 22; settled in Barbados in 1635; David Dennis settled in Virginia in 1663.