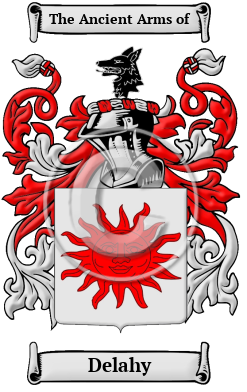 Early Origins of the Delahy family

The surname Delahy was first found in Cambridgeshire where the family claim descent from "the castle and barony of La Haye-du-Puits, in La Manche, Normandy. The great fief of La Haye-du-Puits, in the arrondissement of Coutances, dates, according to M, de Gerville, from the first partition of Normandy under RoUo, though its regularly continued annals commence only with Turstin Halduc, who held it in the eleventh century, and with his son Eudo founded Lessay Abbey a few years before the Conquest." [1]

Early History of the Delahy family

Distinguished members of the family include Jacquotte Delahaye (floruit 1656), an English pirate, or buccaneer, active in the Caribbean sea. She was also known as "Back from...
Another 26 words (2 lines of text) are included under the topic Early Delahy Notables in all our PDF Extended History products and printed products wherever possible.

Delahy migration to the United States +

Delahy Settlers in United States in the 17th Century

Delahy Settlers in United States in the 19th Century

Delahy Settlers in New Zealand in the 19th Century