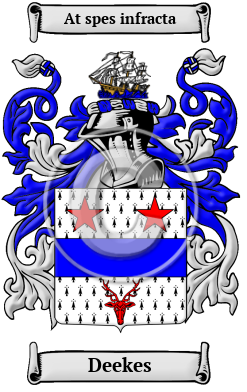 The history of the Deekes family begins among the Pictish clans ancient Scotland. The name Deekes comes from the given name Richard. [1] Dick is a diminutive of this personal name.

One source explains the origin more clearly: "In Scotland it has been variously written at different periods, as Dicson, Dykson, Dikson, Diksoun, Diksoune, Dixson, and Dickson. They are descended from one Richard Keith, said to be a son of the family of Keith, earls-marshal of Scotland, and in proof thereof they carry in their arms the chief of Keith Mareschal. This Richard was commonly called Dick, and his sons, with the carelessness of that age, were styled 'Dickson.' It is probable that he was the son of the great Marshal, Hervey de Keth, (ob. 1249,) by his wife Margaret, daughter of William, third lord Douglas." [2]

Early Origins of the Deekes family

The surname Deekes was first found in Edinburghshire, a former county, now part of the Midlothian council area where William de Dyck was first magistrate of Edinburgh in 1296. John Dic, was a witness in Ayr, 1490, Wille Dic was 'dekin of the bakstaris' of Stirling in 1526. John Dyk or Dik was bailie of David, Earl of Craufurd in Perthshire in 1547 and Alexander Dik was archdean of Glasgow in 1555. [3]

Early History of the Deekes family

In the Middle ages, spelling and translation were not yet regulated by any general rules. spelling variations in names were common even among members of one family unit. Deekes has appeared Dick, Dyck, Dic and others.

Notable amongst the family at this time was Sir William Dick (1580?-1655), Provost of Edinburgh, the only son of John Dick, who held a large proprietor in the Orkneys, and who had acquired considerable wealth by trading with Denmark, and was a favourite of James VI. "In 1618 he advanced 6,000l. to defray the household expenses of James VI when he held a parliament in Scotland in 1618. Through his influence with the government he greatly increased his wealth by farming the customs and excise; he extended the trade of the Firth of Forth with the Baltic and Mediterranean ports, and...
Another 312 words (22 lines of text) are included under the topic Early Deekes Notables in all our PDF Extended History products and printed products wherever possible.

Migration of the Deekes family to Ireland

Some of the Deekes family moved to Ireland, but this topic is not covered in this excerpt.
Another 59 words (4 lines of text) about their life in Ireland is included in all our PDF Extended History products and printed products wherever possible.

Migration of the Deekes family

Faced by this persecution and the generally unstable political climate of those days, many Scots chose to leave their homeland for Ireland, Australia, and North America in search of greater opportunity and freedom. The colonies across the Atlantic were the most popular choice, but a passage there was neither cheap nor easily suffered. Passengers arrived sick and poor, but those who made it intact often found land and more tolerant societies in which to live. These brave settlers formed the backbone of the burgeoning nations of Canada and the United States. It is only this century that the ancestors of these families have begun to recover their collective identity through the patriotic highland games and Clan societies that have sprung up throughout North America. Research into early immigration and passenger lists revealed many immigrants bearing the name Deekes: John Dick and his wife Mary and two children settled in Georgia in 1775; John and Elizabeth Dick settled in Barbados in 1679; John Dick settled in Quebec in 1775.

Motto: At spes infracta
Motto Translation: Yet my hope is unbroken.