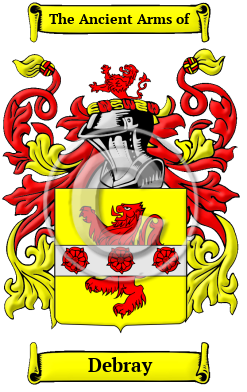 Early Origins of the Debray family

The surname Debray was first found in Lorraine where this distinguished family held a family seat, and the main stem of this aristocratic family were elevated to the nobility on the 4th July 1622. They became the Marquis de Brie.

Early History of the Debray family

This web page shows only a small excerpt of our Debray research. More information is included under the topic Early Debray History in all our PDF Extended History products and printed products wherever possible.

Notable in the family name was Dick Theodore De Brie (1528-1598), French engraver, born at Liege in 1528, and worked for the greater part of his life at Frankfort. "He was for some years in London, and did work here which makes his name of some interest to the English student. He engraved the plates to Boissard's 'Roman Antiquities,' published in four volumes. " [2] Étienne Briard was an engraver of music, born at Bar-le-Duc towards the end of the 15th century, settled at Avignon in 1530. He replaced the square characters hitherto in use by round ones, and devised a simple...
Another 116 words (8 lines of text) are included under the topic Early Debray Notables in all our PDF Extended History products and printed products wherever possible.

In France, the name Debray is the 887th most popular surname with an estimated 5,789 people with that name. [3]

Migration of the Debray family