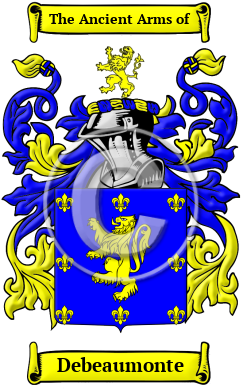 The name Debeaumonte was brought to England by the Normans when they conquered the country in 1066. The ancestors of the Debeaumonte family lived in Dorset and Gloucestershire. "There existed at a remote period, a family of Beaumont in Normandy, and it was, probably, one of its cadets whose name was inscribed on the muster Roll at Battle. Certain it is that he could not have been the founder of the illustrious House of Beaumont, which, in two centuries after, appears so prominently conspicuous among the most potent barons of the realm, and which was established in this country by Henry de Beaumont, fourth son of Agnes de Beaumont, by her husband, Louie, second son of Charles, Kind of Jerusalem, and nephew of Loius IX. of France." [1]

Early Origins of the Debeaumonte family

The surname Debeaumonte was first found in Dorset and Gloucestershire, where "Roger de Belmont appears in [the] Domesday [Book] as chief tenant. According to Sir H. Ellis, he was a near kinsman of the Conqueror, being lineal descendant of that king's great grandfather. Some trace the noble English families from the Viscounts Beaumont of Normandy, and others from the blood-royal of France." [2]

Early History of the Debeaumonte family

It is only in the last few hundred years that the English language has been standardized. For that reason, Anglo-Norman surnames like Debeaumonte are characterized by many spelling variations. Scribes and monks in the Middle Ages spelled names they sounded, so it is common to find several variations that refer to a single person. As the English language changed and incorporated elements of other European languages such as Norman French and Latin, even literate people regularly changed the spelling of their names. The variations of the name Debeaumonte include Beaumont, Beaumond, Beamond, Beamont, Beamonte, Beamonde, Bellmont, Belmont, Beomont, Beumond, Bewmont, Bewmonte, Bellemont, Beumont, Beaumount, Bewmount, Bowmont, Bowmaunt and many more.

Outstanding amongst the family at this time was Viscount Allandale; Henry de Beaumont, 4th Earl of Buchan (circa 1305-1340), a military tactician, who was made the 1st Baron Beaumont in 1309; Sir William de Beaumont, 2nd Viscount Beaumont (1438-1507), fought in several of the major battles of the Wars of the Roses, probably knighted before the Battle of Northampton; Francis Beaumont (c.1585-1616), a British playwright...
Another 65 words (5 lines of text) are included under the topic Early Debeaumonte Notables in all our PDF Extended History products and printed products wherever possible.

Migration of the Debeaumonte family to Ireland

Some of the Debeaumonte family moved to Ireland, but this topic is not covered in this excerpt. More information about their life in Ireland is included in all our PDF Extended History products and printed products wherever possible.

Migration of the Debeaumonte family

Faced with the chaos present in England at that time, many English families looked towards the open frontiers of the New World with its opportunities to escape oppression and starvation. People migrated to North America, as well as Australia and Ireland in droves, paying exorbitant rates for passages in cramped, unsafe ships. Many of the settlers did not make the long passage alive, but those who did see the shores of North America were welcomed with great opportunity. Many of the families that came from England went on to make essential contributions to the emerging nations of Canada and the United States. Some of the first immigrants to cross the Atlantic and come to North America carried the name Debeaumonte, or a variant listed above: John Beamond who settled in Virginia in 1635; Andrew Beaumont settled in New England in 1805; Richard Beamond settled in New Jersey in 1664.