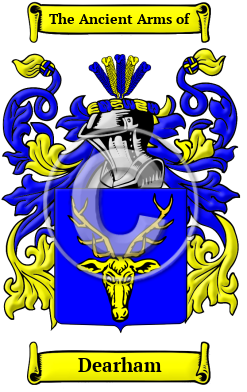 Early Origins of the Dearham family

The surname Dearham was first found in Norfolk at East and West Dereham which dates back to at least the Domesday Book where it was listed as Dereham and literally meant "homestead where deer are kept" having derived from the Old English doer + ham or hamm. [1]

Another source better explains the origin. " This place, formerly called Deerham, from the number of deer by which it was frequented, and distinguished by its adjunct from a village of the same name, is of very remote antiquity." [2]

West Dereham has probably more records of the family than East Dereham. "Sir Thos. Dereham, who was envoy to the Duke of Tuscany in 1697, and to whose family the site of the abbey was granted, erected a wing on each side of the gateway, with a cloister on the south; after his family quitted the mansion, it became the seat of the earls of Mountrath. The church is in the later style, and consists of a nave and chancel, with a circular tower: the chancel contains some handsome monuments to the Derehams." [2]

Some of the first listings of the name include Robert de Derham and John de Derham, both listed in the Hundredorum Rolls of 1273. [3]

Early History of the Dearham family

Spelling variations of this family name include: Dereham, Deerham, Dearhamk and others.

Notable amongst the family name during their early history was Samuel Derham (1655-1689), was an English physician, born in 1655 at Weston, near Campden, Gloucestershire, being the son of William Derham of that place. William Derham (1657-1735), was an English divine, born at Stoulton, near Worcester, on...
Another 47 words (3 lines of text) are included under the topic Early Dearham Notables in all our PDF Extended History products and printed products wherever possible.

Migration of the Dearham family to Ireland

Some of the Dearham family moved to Ireland, but this topic is not covered in this excerpt. More information about their life in Ireland is included in all our PDF Extended History products and printed products wherever possible.

Migration of the Dearham family

Some of the first settlers of this family name or some of its variants were: James Derham who settled in Philadelphia in 1849; together with Michael and William. Mary Derham settled in Boston in 1744.