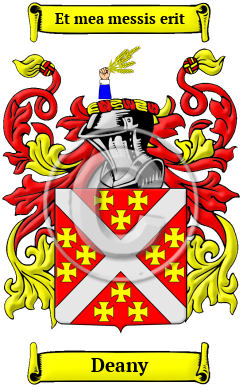 The background history of the name Deany starts in ancient Scotland among the Pictish people. The name Deany is derived from the personal name Dennis. Deany is a patronymic surname, which belongs to the category of hereditary surnames. Some patronyms were formed from the personal names of the father of the bearer, while others came from prominent religious and secular figures. The surname Deany was first established in Lancashire, prior to the Norman Conquest of England in 1066.

Early Origins of the Deany family

The surname Deany was first found in Stirlingshire at Denny, a town and parish. "This place, of which the name, derived from the Gaelic Dun, is descriptive of its situation on an eminence, originally formed part of the parish of Falkirk, from which it was separated about the year 1618. A considerable portion of the parish appears to have belonged to an establishment of Knights Templars which probably existed here or in the immediate vicinity, and the land is still known by the appellation of Temple-Denny. " [1]

Early History of the Deany family

This web page shows only a small excerpt of our Deany research. Another 77 words (6 lines of text) covering the years 1400, 1676, 1501 and 1549 are included under the topic Early Deany History in all our PDF Extended History products and printed products wherever possible.

Prior to the invention of the printing press in the last hundred years, documents were basically unique. Names were written according to sound, and often appeared differently each time they were recorded. Spelling variations of the name Deany include Denny, Denney, Dennie, Denie, Denye, Deanney, Deannie and many more.

Another 42 words (3 lines of text) are included under the topic Early Deany Notables in all our PDF Extended History products and printed products wherever possible.

Migration of the Deany family to Ireland

Some of the Deany family moved to Ireland, but this topic is not covered in this excerpt.
Another 53 words (4 lines of text) about their life in Ireland is included in all our PDF Extended History products and printed products wherever possible.

Deany migration to the United States +

The freedom of the North American colonies was enticing, and many Scots left to make the great crossing. It was a long and hard journey, but its reward was a place where there was more land than people and tolerance was far easier to come by. Many of these people came together to fight for a new nation in the American War of Independence, while others remained loyal to the old order as United Empire Loyalists. The ancestors of Scots in North America have recovered much of this heritage in the 20th century through Clan societies and other such organizations. A search of immigration and passenger lists revealed many important and early immigrants to North America bearing the name of Deany:

Deany Settlers in United States in the 17th Century

Deany Settlers in United States in the 18th Century

Deany Settlers in Australia in the 19th Century