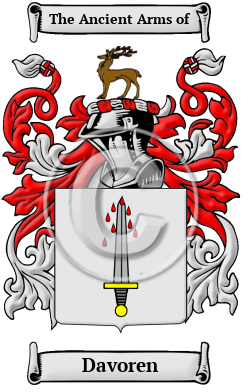 All Irish surnames have a long, ancient Gaelic history behind them. The original Gaelic form of the name Davoren is O Dabhoireann, or also Dubhdabhoireann, derived from the words dubh, which means black, and an da Bhoireann, which means of the two Burrens.

Early Origins of the Davoren family

The surname Davoren was first found in County Clare (Irish: An Clár) located on the west coast of Ireland in the province of Munster, where they have been anciently seated as Chiefs of their territory at Cahirmacneaghty. They were anciently a Dalcassian sept of Brehons (Judges or Lawyers) and came down to Clare from the north probably sometime before the 10th century to settle in their north Clare barony at Noughaval, wherein this distinguished sept had their own mortuary chapel within the Church of Noughaval.

Early History of the Davoren family

This web page shows only a small excerpt of our Davoren research. Another 141 words (10 lines of text) covering the years 1317, 1364, 1634, 1634, 1741 and 1746 are included under the topic Early Davoren History in all our PDF Extended History products and printed products wherever possible.

During the Middle Ages, a standardized literary language known by the general population of Ireland was a thing of fiction. When a person's name was recorded by one of the few literate scribes, it was up that particular scribe to decide how to spell an individual's name. So a person could have several spelling variations of his name recorded during a single lifetime. Research into the name Davoren revealed many variations, including Davoren, O'Davoran, O'Davoren, Davoran, Devoren and many more.

Prominent amongst the family at this time was Gillananaev O'Davoren, the Chief Judge; and Domnal O'Davoren, who collected materials about early Irish law in the 16th century. In fact, the O'Davorens were well known as the scholarly...
Another 36 words (3 lines of text) are included under the topic Early Davoren Notables in all our PDF Extended History products and printed products wherever possible.

Davoren migration to the United States +

In the 18th and 19th centuries, thousands of Irish families fled an Ireland that was forcibly held through by England through its imperialistic policies. A large portion of these families crossed the Atlantic to the shores of North America. The fate of these families depended on when they immigrated and the political allegiances they showed after they arrived. Settlers that arrived before the American War of Independence may have moved north to Canada at the war's conclusion as United Empire Loyalists. Such Loyalists were granted land along the St. Lawrence River and the Niagara Peninsula. Those that fought for the revolution occasionally gained the land that the fleeing Loyalist vacated. After this period, free land and an agrarian lifestyle were not so easy to come by in the East. So when seemingly innumerable Irish immigrants arrived during the Great Potato Famine of the late 1840s, free land for all was out of the question. These settlers were instead put to work building railroads, coal mines, bridges, and canals. Whenever they came, Irish settlers made an inestimable contribution to the building of the New World. Early North American immigration records have revealed a number of people bearing the Irish name Davoren or a variant listed above, including:

Davoren Settlers in United States in the 20th Century

Davoren Settlers in Australia in the 19th Century