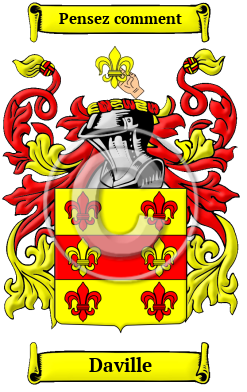 Early Origins of the Daville family

The surname Daville was first found in Warwickshire at Walton-Deivile, an ecclesiastical parish, in the parish of Wellesbourn-Hastings. " The manor [of Walton-Deivile], in the reign of Henry III., was the property of Walter d'Avill, one of the justices of assize for the county." [1]

"Dayville or Deville is from Daiville in Normandy. Walter de Daiville accompanied the Conqueror, and had grants from Roger de Musbray, in Yorkshire, with the title of Seneschal. " [2]

Alternatively the family could have derived their name from Aluuinus Deule who was listed in the Domesday Book of 1086 as holding lands in Bedfordshire and Huntingdonshire. [3]

Early History of the Daville family

This web page shows only a small excerpt of our Daville research. Another 126 words (9 lines of text) covering the years 1510, 1600, 1560, 1455 and 1487 are included under the topic Early Daville History in all our PDF Extended History products and printed products wherever possible.

Spelling variations of this family name include: Dayville, Deyville, Daville, Deville, Davill, Deyvill and many more.

More information is included under the topic Early Daville Notables in all our PDF Extended History products and printed products wherever possible.

Migration of the Daville family