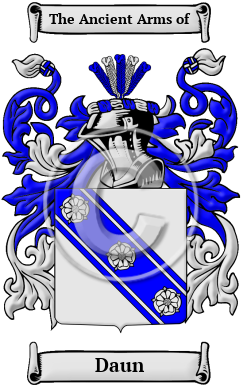 Early Origins of the Daun family

The surname Daun was first found in Cornwall where the family held at one time fifteen manors and were descended by an heiress to the house of Courtenay Earl of Devon about the reign of Edward II. [1]

Early History of the Daun family

Notable amongst the family at this time was John Dawnay of Womersley, Yorkshire; and his son, John Dawnay, 1st Viscount Downe (c 1625-1695), an English politician, Member of Parliament for Yorkshire (1660-1661) and Pontefract (1661-1690.)...
Another 34 words (2 lines of text) are included under the topic Early Daun Notables in all our PDF Extended History products and printed products wherever possible.

Daun migration to the United States +

Daun Settlers in United States in the 19th Century