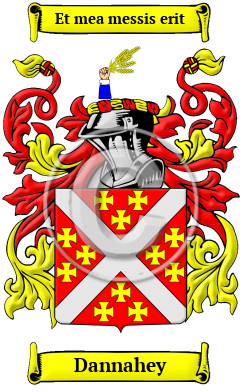 The ancestors of the first family to use the name Dannahey lived among the Pictish people of ancient Scotland. The name Dannahey is derived from the personal name Dennis. Dannahey is a patronymic surname, which belongs to the category of hereditary surnames. Some patronyms were formed from the personal names of the father of the bearer, while others came from prominent religious and secular figures. The surname Dannahey was first established in Lancashire, prior to the Norman Conquest of England in 1066.

Early Origins of the Dannahey family

The surname Dannahey was first found in Stirlingshire at Denny, a town and parish. "This place, of which the name, derived from the Gaelic Dun, is descriptive of its situation on an eminence, originally formed part of the parish of Falkirk, from which it was separated about the year 1618. A considerable portion of the parish appears to have belonged to an establishment of Knights Templars which probably existed here or in the immediate vicinity, and the land is still known by the appellation of Temple-Denny. " [1]

Early History of the Dannahey family

This web page shows only a small excerpt of our Dannahey research. Another 77 words (6 lines of text) covering the years 1400, 1676, 1501 and 1549 are included under the topic Early Dannahey History in all our PDF Extended History products and printed products wherever possible.

The arts of spelling and translation were yet in their infancies when surnames began, so there are an enormous number of spelling variations of the names in early Scottish records. This is a particular problem with Scottish names because of the numerous times a name might have been loosely translated to English from Gaelic and back. Dannahey has been spelled Denny, Denney, Dennie, Denie, Denye, Deanney, Deannie and many more.

Another 42 words (3 lines of text) are included under the topic Early Dannahey Notables in all our PDF Extended History products and printed products wherever possible.

Migration of the Dannahey family to Ireland

Some of the Dannahey family moved to Ireland, but this topic is not covered in this excerpt.
Another 53 words (4 lines of text) about their life in Ireland is included in all our PDF Extended History products and printed products wherever possible.

Migration of the Dannahey family

This oppression forced many Scots to leave their homelands. Most of these chose North America as their destination. Although the journey left many sick and poor, these immigrants were welcomed the hardy with great opportunity. Many of these settlers stood up for their newfound freedom in the American War of Independence. More recently, Scots abroad have recovered much of their collective heritage through highland games and other patriotic functions and groups. An examination of passenger and immigration lists has located various settlers bearing the name Dannahey: Thomas Denny from Combs, Devon, England settled in Leicester, Massachusetts in 1646; Mary Denny settled in New England (Massachusetts) in 1635; another Mary Denny settled in Maryland in 1736.