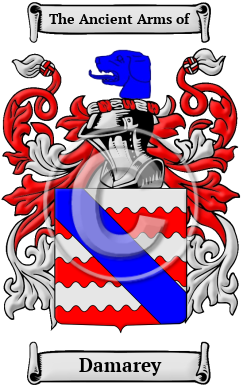 Early Origins of the Damarey family

The surname Damarey was first found in Oxfordshire where one of the first records of the family was Sir Robert D'Amory, Knight, of Bucknell and Woodperry. He also held the manors of Bletchington and Holton, Oxfordshire, Standon in Hertfordshire, Caythorpe in Lincolnshire, and Knaresborough and St. Briavels' Castles. His son, Roger Damory, Lord d'Amory, Baron d'Amory in Ireland, (d. c. 1321) was a nobleman and Constable of Corfe Castle.

Early History of the Damarey family

More information is included under the topic Early Damarey Notables in all our PDF Extended History products and printed products wherever possible.

Damarey migration to the United States +

Damarey Settlers in United States in the 19th Century