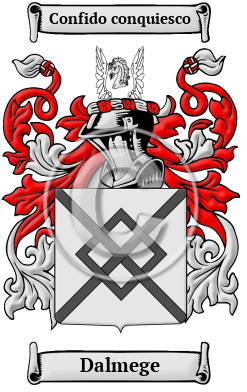 The ancestors of the Dalmege family lived among the ancient Anglo-Saxon tribes of Britain. Dalmege was a name given to a person who habitually wore a knapsack or other type of pack carried on the back. The surname Dalmege is derived from the Old French word talemache, which means knapsack. Nickname surnames often referred to the bearer's favored style of clothing.

Alternatively, this Norman name could have literally meant "totting of the bell." [1]

Early Origins of the Dalmege family

The surname Dalmege was first found in Suffolk where, according to Doctor Bosworth, they were amongst the first Angles that settled in Suffolk. On their manor house at Bentley, near Ipswich there was the following inscription "Before the Normans into England came, Bentley was my seat, and Tollemache was my name." [2] [3]

Early History of the Dalmege family

Dalmege has been spelled many different ways. Before English spelling became standardized over the last few hundred years, spelling variations in names were a common occurrence. As the English language changed in the Middle Ages, absorbing pieces of Latin and French, as well as other languages, the spelling of people's names also changed considerably, even over a single lifetime. Many variations of the name Dalmege have been found, including Talmach, Talmage, Talmash, Tammadge, Tammage, Tallemach, Tollemache, Tolmage and many more.

Distinguished members of the family include Sir Lionel Tollemache (1624-1669), 3rd Baronet of Helmingham was the head of a powerful East Anglian family whose seat was...
Another 26 words (2 lines of text) are included under the topic Early Dalmege Notables in all our PDF Extended History products and printed products wherever possible.

Migration of the Dalmege family

In an attempt to escape the chaos experienced in England, many English families boarded overcrowded and diseased ships sailing for the shores of North America and other British colonies. Those families hardy enough, and lucky enough, to make the passage intact were rewarded with land and a social environment less prone to religious and political persecution. Many of these families became important contributors to the young colonies in which they settled. Early immigration and passenger lists have documented some of the first Dalmeges to arrive on North American shores: William Tallmarsh settled in Jamaica in 1722; William Talmadge settled in Boston Massachusetts in 1630 with his wife; Thomas Talmadge settled in Salem, Massachusetts with his wife in 1630.

Motto: Confido conquiesco
Motto Translation: I trust and am contented.