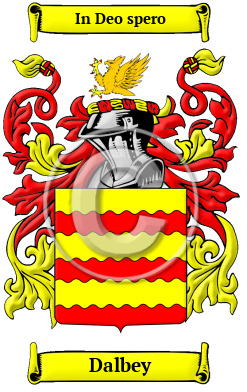 The name Dalbey was brought to England by the Normans when they conquered the country in 1066. The ancestors of the Dalbey family lived in Yortkshire. The name derives, however, from the family's former place of residence, Auby, Normandy, where they would have been referred to as D'Auby, meaning from Auby. [1]

Early Origins of the Dalbey family

Early History of the Dalbey family

It is only in the last few hundred years that the English language has been standardized. For that reason, Anglo-Norman surnames like Dalbey are characterized by many spelling variations. Scribes and monks in the Middle Ages spelled names they sounded, so it is common to find several variations that refer to a single person. As the English language changed and incorporated elements of other European languages such as Norman French and Latin, even literate people regularly changed the spelling of their names. The variations of the name Dalbey include Dalby, Dalbie, Daylby, Dailby, D'Alby, D'Aubly and many more.

Outstanding amongst the family at this time was Richard Dalby (died before 1455), an English politician, Member of the Parliament of England for Gloucester from 1421 to 1435; Robert Dalby (died 1589), an English Catholic priest and martyr; Edward Dalby (ca.1616-1672), a Recorder of Reading, Berkshire; William Dolben (c. 1588-1631), a Welsh clergyman from Pembrokeshire; his son, Sir William Dolben KS KC (c.1627-1694), an English judge who...
Another 66 words (5 lines of text) are included under the topic Early Dalbey Notables in all our PDF Extended History products and printed products wherever possible.

Dalbey Settlers in West Indies in the 17th Century