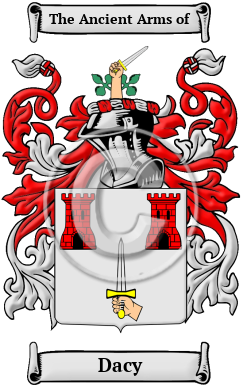 The Irish name Dacy is an Anglicized version of the Gaelic name Déiseach, which is thought to have originally been a nickname for a member of the vassal community (feudal servants) called the Déis, a word of uncertain origin. There was also a Decies barony in County Waterford, and in some cases, this name likely originated with a native of that barony.

Early Origins of the Dacy family

The surname Dacy was first found in counties Cork and Mayo (Irish: Maigh Eo) located on the West coast of the Republic of Ireland in the province of Connacht. It is thought that immigrants from Waterford took on this name after they arrived in their new homelands.

The first recorded instance of the name appears to be a bearer of Dacy, who was a Drogheda juror in Cork as early as 1313. There is a legend in Cork that all the Deasys of the county are ancestors of a child who was rescued from a massacre in the barony of Decies in about 1620. It is claimed that he was then protected by the O'Donovans of the Island, and went on to have seven sons.

Early History of the Dacy family

Spelling variations of this family name include: Deasy, Deacy, Dacy, Dacey, Dease, Daase, Dece and others.

Another 47 words (3 lines of text) are included under the topic Early Dacy Notables in all our PDF Extended History products and printed products wherever possible.

Migration of the Dacy family

Some of the first settlers of this family name or some of its variants were: Catherine Deasy, who arrived at St. John, New Brunswick in 1834; Martin Deasy, whose Oath of Allegiance was recorded in Philadelphia in 1835; Michael Deasy, who died on route to Quebec or at Grosse Isle in 1847.