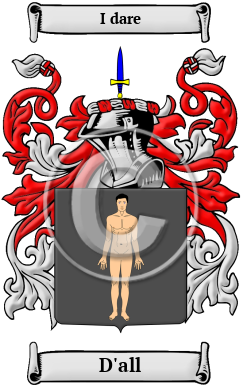 Early Origins of the D'all family

The surname D'all was first found in Lanarkshire (Gaelic: Siorrachd Lannraig) a former county in the central Strathclyde region of Scotland, now divided into the Council Areas of North Lanarkshire, South Lanarkshire, and the City of Glasgow, where they were officially seated from the year 1259 on the lands of Dalyell meaning "the beautiful meadow" on the banks of the River Clyde.

Early History of the D'all family

Notable among the family at this time was Robert Dalzell (1550-1636), English 1st Lord Dalzell, created a Lord in 1628, by King Charles I of England; General Tam (Thomas) Dalyell (1615-1685), a Scottish Royalist General in the Wars of the Three Kingdoms; Sir Robert Dalzell, 1st Baronet (1639-1686), a Scottish politician; Sir John...
Another 53 words (4 lines of text) are included under the topic Early D'all Notables in all our PDF Extended History products and printed products wherever possible.

Migration of the D'all family to Ireland

Some of the D'all family moved to Ireland, but this topic is not covered in this excerpt.
Another 58 words (4 lines of text) about their life in Ireland is included in all our PDF Extended History products and printed products wherever possible.

D'all migration to the United States +

D'all Settlers in United States in the 18th Century

D'all Settlers in United States in the 19th Century

D'all Settlers in Australia in the 19th Century

D'all Settlers in New Zealand in the 19th Century

Historic Events for the D'all family +