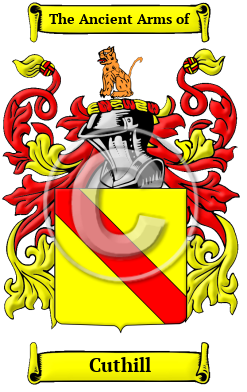 Early Origins of the Cuthill family

The surname Cuthill was first found in Wiltshire where Beringarius Cotel was registered in 1084, two years before the Domesday Book of 1086. In Dorset, Adam Cotella was registered there in the Pipe Rolls of 1167. Eilwinus Kutel, Cutel was a Knights Templar in Essex in 1185; and Walter Cotel was listed in the Curia Regis Rolls for Oxfordshire in 1206. [1] "Cuthill or Cuttle is a suburb of Prestonpans, co. Haddington." [2]

In Scotland, the Cuthell or Cuthill variants are the most popular as the latter is "a suburb of Prestonpans, East Lothian. Thomas Cuthill and George Cuthill, witnesses, 1536. Steven Cutle was indweller in Edinburgh in 1696, and in 1708 the uppermost stories of the tenement of Mrs. Cuthel were damaged by the fire in Edinburgh. Cuthill was also a surname in Stirling in the eighteenth century. Lawrence Cuthill, [was] burgess of Dumbarton, 1825." [3]

Early History of the Cuthill family

Spelling variations of this family name include: Cuttle, Cutle, Cuttell, Cuthill, Cuthell, Cuthil and many more.

Another 41 words (3 lines of text) are included under the topic Early Cuthill Notables in all our PDF Extended History products and printed products wherever possible.

Cuthill migration to the United States +

Cuthill Settlers in United States in the 19th Century

Cuthill Settlers in United States in the 20th Century