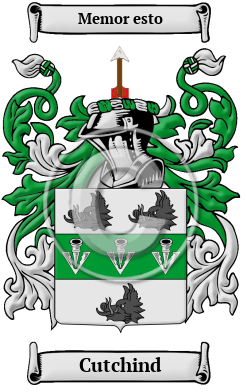 The age-old Hebrides islands and the west coast of Scotland are the ancestral home of the Cutchind family. Their name comes from Hugh or from the Old French word, Huchon.

Early Origins of the Cutchind family

The surname Cutchind was first found in Glasgow, where James Huchonsone held a land in 1454. "John Huchonson was admitted burgess of Aberdeen, 1466, George Huchunson, burgess of Glasgow in 1471 reappears as George Hucheson in following year. Thom Huchonson had a precept of remission for his share in burning Lochfergus, 1488, and Robert Huchonsone, 'sangster and master of the organis' in Aberdeen is referred to again in 1496 as Huchosone and Huchonsoun." [1]

Early History of the Cutchind family

Medieval spelling was at best an intuitive process, and translation between Gaelic and English was no more effective. These factors caused an enormous number of spelling variations in Dalriadan names. In fact, it was not uncommon to see a father and son who spelled their name differently. Over the years, Cutchind has been spelled Hutcheson, Hutchison, Huchison, MacCutcheon, MacHutcheon, MacCutchin, MacCutchan, MacCutchen, MacCutchon and many more.

Notable amongst the Clan from early times was George Hutcheson (1580?-1639), of Lambhill, Lanarkshire, joint-founder with his younger brother Thomas [q.v.], of Hutcheson's Hospital, Glasgow, was the son of John Hutcheson, an old rentaller under the bishops of Glasgow in the lands of Gairdbraid. [4] Thomas Hutcheson (1589-1641), was a joint-founder with his elder brother George [q.v.] of Hutcheson's Hospital, Glasgow, followed, like his brother, the profession of public writer, and was keeper of the register of sasines of the regality of Glasgow and district. [4] The Rev. Francis Hutcheson (1694-1746), was an Irish philosopher from a family of Scottish Presbyterians...
Another 99 words (7 lines of text) are included under the topic Early Cutchind Notables in all our PDF Extended History products and printed products wherever possible.

Migration of the Cutchind family to Ireland

Some of the Cutchind family moved to Ireland, but this topic is not covered in this excerpt.
Another 75 words (5 lines of text) about their life in Ireland is included in all our PDF Extended History products and printed products wherever possible.

Migration of the Cutchind family

Scottish settlers arrived in many of the communities that became the backbones of the United States and Canada. Many stayed, but some headed west for the endless open country of the prairies. In the American War of Independence, many Scots who remained loyal to England re-settled in Canada as United Empire Loyalists. Scots across North America were able to recover much of their lost heritage in the 20th century as Clan societies and highland games sprang up across North America. Early immigration and passenger lists have documented some of the first Cutchinds to arrive on North American shores: John Hutchison settled in New Jersey in 1685; Robert Hutchison settled in New England in 1685; David and Nancy Hutchison arrived in New England in 1805.