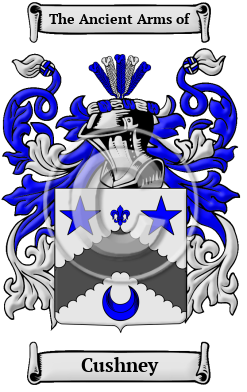 Early Origins of the Cushney family

The surname Cushney was first found in Aberdeenshire (Gaelic: Siorrachd Obar Dheathain), a historic county, and present day Council Area of Aberdeen, located in the Grampian region of northeastern Scotland, where they held a family seat in their territories in the parish of Leochel and Cushnie. "These two ancient parishes, the etymology of the names of which is altogether uncertain, were united in 1618, by a decreet of the lords of Plat; but this union was dissolved about three years subsequently, by the influence of Bishop Patrick Forbes, a central church for the two districts not having been built according to the conditions of the annexation." [1]

Early History of the Cushney family

This web page shows only a small excerpt of our Cushney research. Another 115 words (8 lines of text) covering the years 1801 and 1745 are included under the topic Early Cushney History in all our PDF Extended History products and printed products wherever possible.

More information is included under the topic Early Cushney Notables in all our PDF Extended History products and printed products wherever possible.

Cushney migration to the United States +

Cushney Settlers in United States in the 19th Century