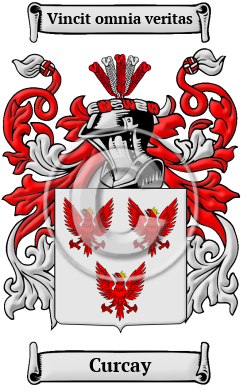 The Curcay surname is derived from the place named Courcy in Normandy, France. "A well-known Norman baronial family, from which sprang the barons De Courcy, the Earls of Ulster, and the Barons Kingsale." [1]

Early Origins of the Curcay family

The surname Curcay was first found in Stoke County, Somerset, one of the baronies received by Richard de Courcy, who accompanied William, Duke of Normandy, on his conquest of England, and was present at the decisive battle of Hastings, 14 Oct. 1066. He was also given the lordships of Newentam, Seckenden, and Foxcote, in Oxfordshire. There is a record of Richard de Curci in the Domesday Book of 1086, in Oxfordshire. [2] William de Curcy, also a landowner listed in the Domesday book married King William I's daughter Emma.

John de Courci (d. 1219?), "was a soldier of fortune, whose parentage is a problem as yet, it would seem, unsolved. He was certainly one of the well-known house of that name established in Oxfordshire and Somersetshire, for he appears with a Jordan de Courci (probably his brother) as a witness to a grant by William de Courci (a royal dapifer) to St. Andrew of Stoke, which foundation the De Courcis had bestowed on the abbey of Lonlay in Normandy."

"Whatever his origin, the facts of his life have been lost in a maze of legend, and it is now a matter of difficulty to sift the true from the false. His first appearance in history is in the Norman-French poem assigned (but in error) to Mathew Regan, where he is represented as receiving in Ireland from Henry II (1172) a license to conquer Ulster; this, however, is scarcely consistent with the version given by Giraldus. According to this, John de Courci was one of three leaders, with ten knights apiece, who were despatched to Ireland by Henry on hearing of Strongbow's death, as an escort to William FitzAldelm, whom he entrusted with plenary powers (cap. xv.). The expedition sailed in December 1176, and within a month of his landing De Courci, with twenty-two knights and some three hundred followers, had set out from Dublin on his daring raid to conquer the kingdom of Ulster." [3]

Early History of the Curcay family

This web page shows only a small excerpt of our Curcay research. Another 110 words (8 lines of text) are included under the topic Early Curcay History in all our PDF Extended History products and printed products wherever possible.

More information is included under the topic Early Curcay Notables in all our PDF Extended History products and printed products wherever possible.

Migration of the Curcay family

Some of the first settlers of this family name or some of its variants were: Henry DeCourcy, on record in Maryland in 1634; William de Courcy, a Jacobite sent to Maryland in 1763; James Courcey, an enforced emigrant from Ireland to America in 1739.