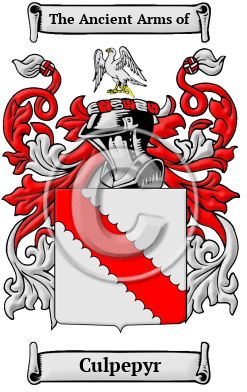 The history of the name Culpepyr dates back to the ancient Anglo-Saxon culture of Britain. It is derived from a member of the family who worked as a spicer. The name is derived from two Old English elements, cul and pepper. It meant "pepper gatherer." [1] As spices were rare and expensive in the medieval period, this would have been a valued occupation.

Early Origins of the Culpepyr family

The surname Culpepyr was first found in Kent where the family descend from Culpepers of Bay Hall, Pembury, Kent. It is generally thought that the first record of the family was John de Colepepper (c. 1140) from Bay Hall, Pepenbury. His son, Sir Thomas de Colpepper (1170-c.1200) was Recognitor of the Grand Assize in Sussex. He died in Sussex at the age of 30. Bay Hall Manor was held by the family until 1480 when it was sold Humphrey Stafford, Duke of Buckingham.

Early History of the Culpepyr family

Migration of the Culpepyr family

To escape the unstable social climate in England of this time, many families boarded ships for the New World with the hope of finding land, opportunity, and greater religious and political freedom. Although the voyages were expensive, crowded, and difficult, those families that arrived often found greater opportunities and freedoms than they could have experienced at home. Many of those families went on to make significant contributions to the rapidly developing colonies in which they settled. Early North American records indicate many people bearing the name Culpepyr were among those contributors: Henry Culpeper who settled in Virginia in 1663; Jonathan Culpeper settled in Virginia in 1646; William Culpepper settled in New England in 1634; Margaret Culpepper settled in Virginia in 1751..