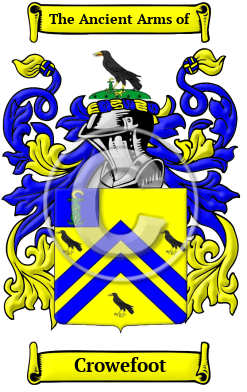 The ancient Anglo-Saxon culture of England produced the name of Crowefoot. It was given to a person with abnormally shaped feet, or a gait resembling that of a crow. [1]

Although the Anglo-Saxon surname Crowefoot may sound like a Native American name, it is derived from the Old English words crawe or crawa, which mean crow, and fot, which means foot. However, the Old English phrase crou-fot was also a name for the buttercup. Moreover, the surname Crowefoot may in some cases be derived from the name of the settlement of Crawford, which was in the Scottish county of Lanark. [2]

Early Origins of the Crowefoot family

The surname Crowefoot was first found in Suffolk where they held a family seat. From their early beginnings, for the next few centuries, the family name also acquired other estates or manors as branches established themselves throughout England. The major conflicts of the eras, such as the War of the Roses, the English Reformation, and the English Civil War sometimes found them to be in opposing camps, with conflicting interests. Although this name may sound like an Indian name to North Americans it has its roots in Suffolk.

Early History of the Crowefoot family

This web page shows only a small excerpt of our Crowefoot research. Another 29 words (2 lines of text) covering the years 1524, 1736, 1817 and 1875 are included under the topic Early Crowefoot History in all our PDF Extended History products and printed products wherever possible.

One relatively recent invention that did much to standardize English spelling was the printing press. However, before its invention even the most literate people recorded their names according to sound rather than spelling. The spelling variations under which the name Crowefoot has appeared include Crowfoot, Crowfote, Crowfoote, Crowefoot, Crofford, Croford, Croffet, Crofut, Croffut, Crofoot, Croffit, Croffitt and many more.

Another 31 words (2 lines of text) are included under the topic Early Crowefoot Notables in all our PDF Extended History products and printed products wherever possible.

Migration of the Crowefoot family

At this time, the shores of the New World beckoned many English families that felt that the social climate in England was oppressive and lacked opportunity for change. Thousands left England at great expense in ships that were overcrowded and full of disease. A great portion of these settlers never survived the journey and even a greater number arrived sick, starving, and without a penny. The survivors, however, were often greeted with greater opportunity than they could have experienced back home. These English settlers made significant contributions to those colonies that would eventually become the United States and Canada. An examination of early immigration records and passenger ship lists revealed that people bearing the name Crowefoot arrived in North America very early: Elizab Crofford, who arrived in Virginia in 1652; Anne Crofford, who settled in Virginia in 1728; Elizabeth Crofford, who came to Charles Town [Charleston], South Carolina in 1768.