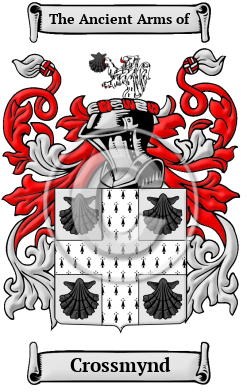 The Anglo-Saxon name Crossmynd comes from when the family resided in an area that was close to a wooden or stone cross, or a crossroads. The surname was originally derived from the word kross.

Early Origins of the Crossmynd family

The surname Crossmynd was first found in Somerset where some of the earliest records of the name include: Nicholas Crousman, Philip Crosman and Thomas Crosman are all listed there in the reign of Edward III. [1] Philip Crosman was listed in the Subsidy Rolls of Somerset in 1327. [2]

Early History of the Crossmynd family

This web page shows only a small excerpt of our Crossmynd research. Another 69 words (5 lines of text) covering the years 1623, 1683 and 1683 are included under the topic Early Crossmynd History in all our PDF Extended History products and printed products wherever possible.

Another 34 words (2 lines of text) are included under the topic Early Crossmynd Notables in all our PDF Extended History products and printed products wherever possible.

Migration of the Crossmynd family