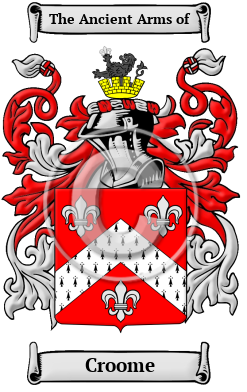 The Croome surname is thought to be derived from the Old English word "crumb," which meant "bent" or "crooked." [1] The name may have been a nickname for a crippled person, or it may have been an occupational name for a maker or seller of hooks. There are also several place names in Britain, such as Croom, East Yorkshire and Croome, Worcestershire from which surnames may have evolved.

Early Origins of the Croome family

The surname Croome was first found in Croom, a hamlet, in the parish of Sledmere, union of Driffield, wapentake of Buckrose, East Riding of Yorkshire. [2] [3]

Another source questions this origin: "but Croom, the Yorkshire place-name, is found in Domesday as Crognum, apparently the Old Norse krókinum, dat. sing. with affixed article of krók-r, crook." [4]

And yet another source claims the family was originally from Normandy and were "a form of Crun or Craon (Crowne or De Craon.) [5]

As far as early records of the family, this has proven to be difficult. One noted source points to a strong relationship between Croomb and Crome (including the many variants.) In the case, Robert de Crumbe was the first listed in the Assize Rolls of Staffordshire in 1199. He continues to note Maud le Crombe and John Croume in the Subsidy Rolls of Worcestershire in 1275; and Simon Crumbe in the Subsidy Rolls of Sussex in 1296. [1]

Early History of the Croome family

Spelling variations of this family name include: Croone, Croon, Croom, Crome, Crone, Cron, Croome and others.

Distinguished members of the family include Edward Crome (d. 1562), English Protestant divine, educated at Cambridge, taking the degrees of B.A. in 1503, M.A. in 1507, and D.D. in 1526. [6] William Croone or Croune (1633-1684)...
Another 35 words (2 lines of text) are included under the topic Early Croome Notables in all our PDF Extended History products and printed products wherever possible.

Croome migration to the United States +

Croome Settlers in United States in the 17th Century

Croome Settlers in Australia in the 19th Century