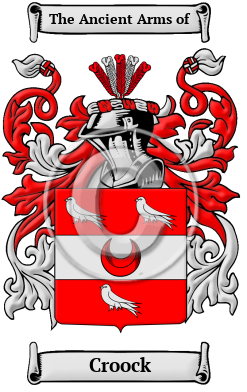 The Croock surname in England is said to descend from Nicholas Le Blount, who was outlawed and exiled after having worked to try and restore Richard II (reign 1377-1399) to the throne. It is said that he returned to England, with his name changed to Croke.

Early Origins of the Croock family

The surname Croock was first found in Shropshire. Robert Croc was a retainer of Walter, the first High Steward of Scotland, and probably accompanied his lord north from Shropshire. Robert held lands in Renfrewshire and Ayrshire during the late 12th century.

Early History of the Croock family

Notable among the family at this time was Richard Croke or Crocus (c.1489-1558), English classical scholar, tutor and agent of Henry VIII; Sir George Croke of Studley, eminent Judge under Charles I (reign 1625-1649); Sir John Croke (1553-1620), Speaker of the English House of Commons; Sir Henry Croke (1588-1660), an English landowner, office holder and politician who sat in the House of Commons between 1614 and 1629; Sir Robert Croke (c.1609-1680), an English lawyer and politician who sat...
Another 77 words (6 lines of text) are included under the topic Early Croock Notables in all our PDF Extended History products and printed products wherever possible.

Migration of the Croock family to Ireland

Some of the Croock family moved to Ireland, but this topic is not covered in this excerpt.
Another 57 words (4 lines of text) about their life in Ireland is included in all our PDF Extended History products and printed products wherever possible.

Migration of the Croock family