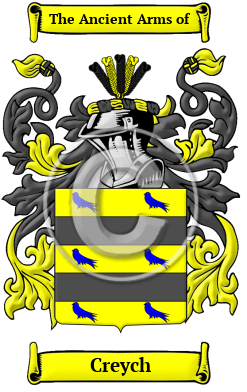 The ancestors of the first family to use the name Creych lived among the ancient Scottish people called the Picts. The Creych family lived in the lands of Creich in Fife. "This place is supposed to have derived its name, signifying in the Gaelic language, rocky or rugged ground, from the general appearance of its surface. " [1]

Criech is a parish, in the county of Sutherland, 11½ miles from Tain. "This place is famed for a contest which happened in the eleventh or twelfth century, between the Scots and the Danes, at Druimleah, near Bonar-Bridge, whence the invaders, after being completely routed, retired to their ships at Portnacoulter, at present called the Meikle Ferry. " [1]

Early Origins of the Creych family

The surname Creych was first found in Fife, at Creich, derived from the ancient Celtic word "crug" which means a mound or hill. [2]

"The parish of Creich, in the northern part of Fifeshire, contains the remains of an ancient casde but there is no trace of any family bearing the name occupying the lands. Douenaldus (i.e. Donald) de Creych, a cleric, was one of the witnesses to a confirmation charter by Walter, son of Alan of the land of Tubermor between 1204 and 1241. " [3]

While the surname hails from Scotland, there are at least two listing of the same name further south in England, specifically Creech East in Dorset and Creech St. Michael in Somerset.

Both date back to the Domesday Book where they were listed as Cris and Crixe, respectively. [4]

Early History of the Creych family

In the Middle ages, spelling and translation were not yet regulated by any general rules. spelling variations in names were common even among members of one family unit. Creych has appeared Creech, Creich, Creigh, Craich, Creych, Creyche and others.

Notable amongst the Clan at this time was Thomas Creech (1659-1700), an English translator of classical works, and headmaster of Sherborne School, born at Blandford in Dorset. His...
Another 27 words (2 lines of text) are included under the topic Early Creych Notables in all our PDF Extended History products and printed products wherever possible.

Migration of the Creych family

Faced by this persecution and the generally unstable political climate of those days, many Scots chose to leave their homeland for Ireland, Australia, and North America in search of greater opportunity and freedom. The colonies across the Atlantic were the most popular choice, but a passage there was neither cheap nor easily suffered. Passengers arrived sick and poor, but those who made it intact often found land and more tolerant societies in which to live. These brave settlers formed the backbone of the burgeoning nations of Canada and the United States. It is only this century that the ancestors of these families have begun to recover their collective identity through the patriotic highland games and Clan societies that have sprung up throughout North America. Research into early immigration and passenger lists revealed many immigrants bearing the name Creych: Stephen Creigh who settled in Philadelphia in 1850.