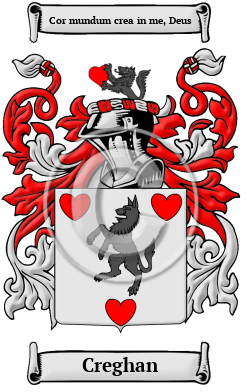 The Irish name Creghan has a long Gaelic heritage to its credit. The original Gaelic form of the name Creghan is O Croidheagain, from the word "croidhe," which means "heart."

Early Origins of the Creghan family

The surname Creghan was first found in Donegal (Irish: Dún na nGall), northwest Ireland in the province of Ulster, sometimes referred to as County Tyrconnel, where they held a family seat from ancient times.

Early History of the Creghan family

This web page shows only a small excerpt of our Creghan research. Another 65 words (5 lines of text) covering the year 1616 is included under the topic Early Creghan History in all our PDF Extended History products and printed products wherever possible.

Those scribes in Ireland during the Middle Ages recorded names as they sounded. Consequently, in this era many people were recorded under different spellings each time their name was written down. Research on the Creghan family name revealed numerous spelling variations, including Cregan, Crean, O'Crean, O'Cryan, Creaghan, Creegan, Creahan, Crehan, Creane and many more.

More information is included under the topic Early Creghan Notables in all our PDF Extended History products and printed products wherever possible.

Creghan Settlers in Australia in the 18th Century