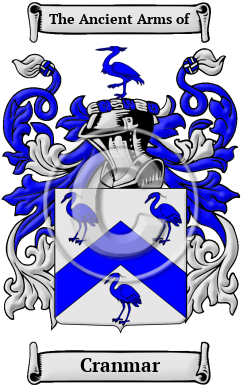 Cranmar is a name of ancient Anglo-Saxon origin and comes from the family once having lived in the region of Cranemere.One of the first record of the name was Nigel de Cranemore who was listed in the in census records of 1235. A few years later Hugh de Cranemere was listed in the Rotuli Hundredorum of Hertfordshire in 1275 and almost a century later Thomas de Cranmer was listed in the Assize Rolls of Lancashire in 1373. [1]

Early Origins of the Cranmar family

The surname Cranmar was first found in Nottinghamshire at Whatton, a parish, in the union, and north division of the wapentake, of Bingham. "The church is an ancient structure, with a handsome tower surmounted by a spire, and contains the effigy of a Knight Templar in armour, and a tablet in memory of Thomas Cranmer, father of the archbishop, who was born at Aslacton in 1489." [2]

Another branch of the family was found at Horsforth in the West Riding of Yorkshire in early times. "This place, in the Domesday Survey Horseford, formed part of the revenue of Kirkstall Abbey, after the dissolution of which establishment, the manor was granted to the Cranmer family, who sold it to Lord Clinton." [2]

Early History of the Cranmar family

Sound was what guided spelling in the essentially pre-literate Middle Ages, so one person's name was often recorded under several variations during a single lifetime. Also, before the advent of the printing press and the first dictionaries, the English language was not standardized. Therefore, spelling variations were common, even among the names of the most literate people. Known variations of the Cranmar family name include Cranmer, Cranmar, Crammer and others.

Notables of this surname at this time include: Thomas Cranmer (1489-1556), Archbishop of Canterbury, born at Aslacton in Nottinghamshire 2 July 1489. "He came of an old family, originally of Lincolnshire, but for some generations settled in the county of his birth. His father, who bore the same Christian name as himself, put him to school 'with a marvellous severe and cruel schoolmaster,'...
Another 62 words (4 lines of text) are included under the topic Early Cranmar Notables in all our PDF Extended History products and printed products wherever possible.

Migration of the Cranmar family

For political, religious, and economic reasons, thousands of English families boarded ships for Ireland, Canada, the America colonies, and many of smaller tropical colonies in the hope of finding better lives abroad. Although the passage on the cramped, dank ships caused many to arrive in the New World diseased and starving, those families that survived the trip often went on to make valuable contributions to those new societies to which they arrived. Early immigrants bearing the Cranmar surname or a spelling variation of the name include: John Crammer who settled in New England in 1805.