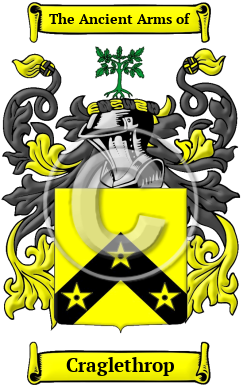 Early Origins of the Craglethrop family

The surname Craglethrop was first found in Westmorland, where they held a family seat as Lords of the Manor of Crackenthorpe from the 12th century, some say, at the time of the Norman Conquest of England by Duke William of Normandy in 1066 A.D.

Early History of the Craglethrop family

Notable amongst the family at this time was John Crakenthorpe, High Sheriff of Cumberland in 1513 and 1514. Richard Crakanthorpe (1567-1624), was an English divine, born at or near Strickland in Westmorland in 1567, and at the age...
Another 37 words (3 lines of text) are included under the topic Early Craglethrop Notables in all our PDF Extended History products and printed products wherever possible.

Migration of the Craglethrop family

The freedom, opportunity, and land of the North American colonies beckoned. There, Scots found a place where they were generally free from persecution and where they could go on to become important players in the birth of new nations. Some fought in the American War of Independence, while others went north to Canada as United Empire Loyalists. The ancestors of all of these Scottish settlers have been able to recover their lost national heritage in the last century through highland games and Clan societies in North America. Among them: Samuel Crakenthorp who landed in North America in 1760.