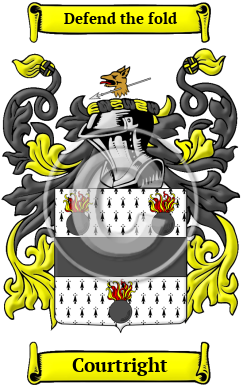 The name could also have been "from Cauterêts; a location name in Normandy Cateray in Roll of Battell Abbey. De Ceterith, a tenant in chief in the Domesday Book. " [2]

Another source notes the family is "armorially identified with Cateryke, or Catherick (Robson). Catherick was part of the demesne of the Earls of Richmond, and the surname therefore probably arose from tenure of the office of Seneschal by a branch of a neighbouring family. The arms (a fesse) are those of the adjoining family of De Smythton or Eschalers, with three cinquefoils for difference, which were afterwards corrupted into ‘roses', 'Catherine wheels', and ‘fire-balls with rays.’ Of this family Ilbert de Catherege, or Catherage (a form of Catheric), occurs in Normandy, 1180-98 (Magni Rotuli Scaccarii Normanniae); which shows the Norman origin of the family. A branch long remained at Stanwick, in Richmondshire, close to Catterick. Another branch was seated in Notts, and one in Cambridge; and the name there changed from Cateryke to Cartwright." [3]

Early Origins of the Courtright family

Early History of the Courtright family

Notables of the family at this time include Thomas Cartwright (1535-1603), described by Strype (Annals, ii. i. c. 1) as 'the head and most learned of that sect of dissenters then called Puritans,' was a native of Hertfordshire, but his place of birth is not recorded." [5] Christopher Cartwright (1602-1658), was an English divine, born in the parish of St. Michael-le-Belfry, York. He was a Hebraist and used targums in Biblical exegesis, following the lead of Henry Ainsworth with John Weemes. [5] William Cartwright (1634-1676), was an English politician who sat in the House of Commons in 1659; Thomas Cartwright (1634-1689), was an...
Another 140 words (10 lines of text) are included under the topic Early Courtright Notables in all our PDF Extended History products and printed products wherever possible.

In the United States, the name Courtright is the 11,095th most popular surname with an estimated 2,487 people with that name. [6]

Migration of the Courtright family

In an attempt to escape the chaos experienced in England, many English families boarded overcrowded and diseased ships sailing for the shores of North America and other British colonies. Those families hardy enough, and lucky enough, to make the passage intact were rewarded with land and a social environment less prone to religious and political persecution. Many of these families became important contributors to the young colonies in which they settled. Early immigration and passenger lists have documented some of the first Courtrights to arrive on North American shores: Bethia Cartwright who settled in Salem Massachusetts in 1630; John Cartwright settled in Virginia in 1624; Matthew Cartwright settled in Maryland in 1700.