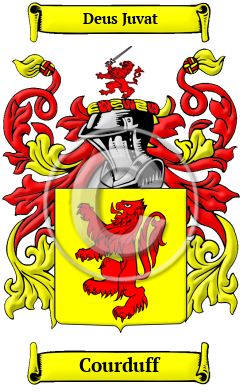 In ancient Scotland, the ancestors of the Courduff family were part of a tribe called the Picts. The name Courduff is derived from the Gaelic Dubh or the older Gaelic word Dub.

Early Origins of the Courduff family

The surname Courduff was first found in Perthshire (Gaelic: Siorrachd Pheairt) former county in the present day Council Area of Perth and Kinross, located in central Scotland, where one of the first records of the name was Duncan Duff who was witness to a charter in 1275.

The Clan claim descent from Duff (Dubh, the Black) (d. 967), King of Celtic Alban. He was son of Malcolm and succeeded, in 962, Constantine as king. " In 965 Duff defeated Colin, the son of Indulph, supported by the abbot of Dunkeld and the chief of Athole at Drumcrub in Strathearn. Two years later Colin reversed this victory and expelled Duff, who, according to a later chronicle, was afterwards, when attempting to recover his kingdom, slain at Forres. His body was hidden under the bridge of Kinloss, and the sun did not shine till it was found and buried. An eclipse on 10 July 967 may have originated or confirmed this story." [1]

Early History of the Courduff family

This web page shows only a small excerpt of our Courduff research. Another 127 words (9 lines of text) covering the years 1320 and are included under the topic Early Courduff History in all our PDF Extended History products and printed products wherever possible.

The appearance of the printing press and the first dictionaries in the last few hundred years did much to standardize spelling. Prior to that time scribes spelled according to sound, a practice that resulted in many spelling variations. Courduff has been spelled Duff, MacDuff and others.

More information is included under the topic Early Courduff Notables in all our PDF Extended History products and printed products wherever possible.

Migration of the Courduff family to Ireland

Some of the Courduff family moved to Ireland, but this topic is not covered in this excerpt.
Another 75 words (5 lines of text) about their life in Ireland is included in all our PDF Extended History products and printed products wherever possible.

Migration of the Courduff family

The expense of the crossing to the North American colonies seemed small beside the difficulties of remaining in Scotland. It was a long and hard trip, but at its end lay the reward of freedom. Some Scots remained faithful to England and called themselves United Empire Loyalists, while others fought in the American War of Independence. Much of this lost Scottish heritage has been recovered in the last century through Clan societies and other patriotic Scottish organizations. A search of immigration and passenger lists revealed many important, early immigrants to North America bearing the name of Courduff: Captain Duff who settled in Boston in 1763; Anne Duff settled in Jamaica in 1774; Donald Duff settled in S.Carolina in 1716; John Duff settled in Pennsylvania in 1772.