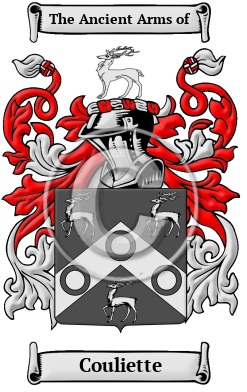 Couliette is a name that dates far back into the mists of early British history to the days of the Anglo-Saxon tribes. It is derived from the given name Nicholas. A common diminutive of the name Nicholas was Col and Ard was a Norman French suffix that meant son of. "William Colet was resident in Normandy 1180-95 (Mag. Rot. Scac.); Humphry and William Colet in 1198." [1]

Early Origins of the Couliette family

The surname Couliette was first found in Oxfordshire where "the Colletts of this county are mostly found in the Oxford district. The name of Collet was represented in Oddington in the reign of Elizabeth. In the 13th century Colet was an Oxfordshire, Shropshire, and a London name. The "colet" was the old English form of "acolyte," a church servant, and it is remarkable that, as a rule, the homes of the Colletts are, or have been, in the vicinity of ecclesiastical centres." [3]

Early History of the Couliette family

It is only in the last few hundred years that the English language has been standardized. For that reason, early Anglo-Saxon surnames like Couliette are characterized by many spelling variations. As the English language changed and incorporated elements of other European languages, even literate people changed the spelling of their names. The variations of the name Couliette include: Collett, Colett, Collet, Coullet, Caullet, Cowlett, Cowllett, Colleyt, Coulett, Caulett, Caullett, Coullett, Collette, Colette, Collete and many more.

Notables of the family at this time include John Colet (1467-1519), a humanist and divine, a friend of Erasmus who helped bring the new learning to England. He was the Dean of St. Paul's, and founder of...
Another 37 words (3 lines of text) are included under the topic Early Couliette Notables in all our PDF Extended History products and printed products wherever possible.

Migration of the Couliette family

Many English families tired of political and religious strife left Britain for the new colonies in North America. Although the trip itself offered no relief - conditions on the ships were extremely cramped, and many travelers arrived diseased, starving, and destitute - these immigrants believed the opportunities that awaited them were worth the risks. Once in the colonies, many of the families did indeed prosper and, in turn, made significant contributions to the culture and economies of the growing colonies. An inquiry into the early roots of North American families has revealed a number of immigrants bearing the name Couliette or a variant listed above: James Collett who settled in Virginia in 1654; Richard Collett, who settled in Virginia in 1642; William Collett, who arrived in Pennsylvania in 1682.