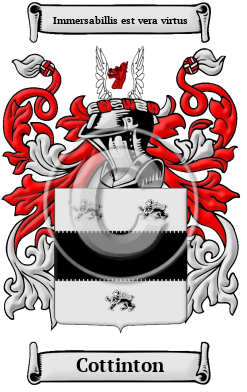 Cottinton is a name of ancient Anglo-Saxon origin and comes from the family once having lived in one of the various settlements called Coddington in the counties of Cheshire, Derbyshire, Hertfordshire, and Nottinghamshire. Thus, the surname Cottinton belongs to the large category of Anglo-Saxon habitation names, which are derived from pre-existing names for towns, villages, parishes, or farmsteads.

Early Origins of the Cottinton family

The surname Cottinton was first found in Gloucestershire at Codrington, which dates back to at least the 12th century when it was listed as Cuderintuna and literally meant "estate associated with a man called Cuthhere" derived from the Old English personal name + ing + tun. [1] Another reference further breaks down the name Cuthhere or Cuohere as a personal name composed of the elements "cuo" meaning famous or well-known + "here," meaning army. [2]

Early History of the Cottinton family

This web page shows only a small excerpt of our Cottinton research. Another 68 words (5 lines of text) covering the years 1668, 1710, 1665, 1619, 1626 and 1691 are included under the topic Early Cottinton History in all our PDF Extended History products and printed products wherever possible.

Sound was what guided spelling in the essentially pre-literate Middle Ages, so one person's name was often recorded under several variations during a single lifetime. Also, before the advent of the printing press and the first dictionaries, the English language was not standardized. Therefore, spelling variations were common, even among the names of the most literate people. Known variations of the Cottinton family name include Codrington, Coddrington, Codrinton, Coddrinton and others.

Notables of this surname at this time include: Christopher Codrington (1668-1710), British soldier, slaver, bibliophile and colonial governor who upon his death bequeathed his slave plantations to found Codrington College, St. John, Barbados. Born in the Barbados, his father, also Christopher Codrington, was captain-general of the Leeward Islands. Young Codrington was sent to England to be educated, and went to school at Enfield under Dr. Wedale. [3] Robert Codrington (d...
Another 68 words (5 lines of text) are included under the topic Early Cottinton Notables in all our PDF Extended History products and printed products wherever possible.

Migration of the Cottinton family

For political, religious, and economic reasons, thousands of English families boarded ships for Ireland, Canada, the America colonies, and many of smaller tropical colonies in the hope of finding better lives abroad. Although the passage on the cramped, dank ships caused many to arrive in the New World diseased and starving, those families that survived the trip often went on to make valuable contributions to those new societies to which they arrived. Early immigrants bearing the Cottinton surname or a spelling variation of the name include: Jonathon Coddrington who settled in Barbados in 1680 with his servants; Robert Codrington settled in Barbados with his wife and daughter in 1678; Lieutenant Codrington also settled in Barbados in 1679.