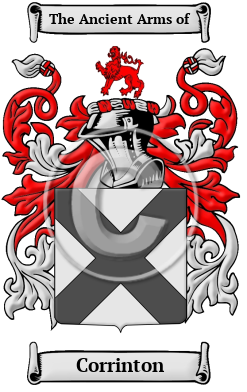 Early Origins of the Corrinton family

The surname Corrinton was first found in Cornwall where they held a family seat as Lords of the Manor of Coryton and St. Ives. The church in the parish of Mellyn or St. Mellion in Cornwall "is an ancient structure in the early English style, with a lofty tower of granite; it contains some rich Norman details, and monuments to the Coryton family." [1]

Early History of the Corrinton family

Another 49 words (4 lines of text) are included under the topic Early Corrinton Notables in all our PDF Extended History products and printed products wherever possible.

Migration of the Corrinton family