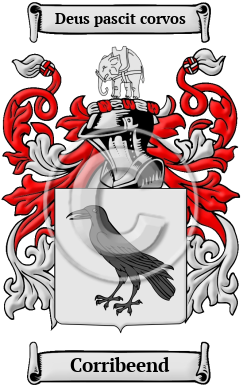 From the historical and enchanting region of Normandy emerged a multitude of noble families, including the distinguished Corribeend family. Originally, the Norman people were known only by a single name. Surnames evolved during the Middle Ages when people began to assume an extra name to avoid confusion and to further identify themselves. Often they adopted names that were derived from nicknames. Nickname surnames were derived from an eke-name, or added name. They usually reflected the physical characteristics or attributes of the first person that used the name. The name Corribeend is a nickname type of surname for a person with dark hair. Tracing the origin of the name further, we found the name Corribeend was originally derived from the Old French word "corbeau," which means "raven." [1]

Early Origins of the Corribeend family

The surname Corribeend was first found in Shropshire, where they claim descendancy from Roger, son of Corbet as listed in the Domesday Book of 1086. Roger le Corbet (or Fitz Corbet) was granted several manors by William the Conqueror as the Barony of Caus for his role in the Conquest. "The first Corbet came from Shropshire and settled in Teviotdale under Earl David in the first quarter of the twelfth century. He is said to have obtained the manor of Foghou which he held as a vassal under the earls of Dunbar (Chalmers, I, p. 499). Robert Corbet was a witness to the Inquisitio of Earl David c. 1124, and to a charter by the earl to Selkirk Abbey (Kelso, 4). His son, Walter, acquired the manor of Malcarvestun and other lands in Teviotdale and made grants to the Abbey of Kelso, and gifted the church of Malcaruiston to the same abbey." [2]

"Corbet, a noble Norman, came into England with the Conqueror, and from his son Roger Corbet descended the baronial house, as well as the families of the name now existing." [1]

Another source notes "a Norman family too well known to need any detail. Hence the Barons Corbet of Caux, and the Baronets Corbet." [3]

Early History of the Corribeend family

Spelling variations of this family name include: Corbett, Corbet, Corbetts, Corbit, Corbitt, Corbitts and many more.

Notable among the family at this time was Sir Robert Corbett of Selkirk Abbey; Sir Andrew Corbet (1580-1637), an English politician, Member of Parliament for Shropshire (1624-25), matriculated at Queen's College, Oxford (1600); Richard Corbet (1582-1635) poet and prelate; Sir John Corbet, 1st Baronet of Stoke upon Tern (1594-1662), an English politician who sat in the House of Commons between 1646 and 1648; Miles Corbet (1595-1662), an English politician, recorder of Yarmouth, convicted for Regicide of King...
Another 76 words (5 lines of text) are included under the topic Early Corribeend Notables in all our PDF Extended History products and printed products wherever possible.

Migration of the Corribeend family to Ireland

Some of the Corribeend family moved to Ireland, but this topic is not covered in this excerpt.
Another 57 words (4 lines of text) about their life in Ireland is included in all our PDF Extended History products and printed products wherever possible.

Migration of the Corribeend family

Some of the first settlers of this family name or some of its variants were: Alexander Corbet who sailed on the Lucy to Canada and settled in PEI in 1790; Ann Corbet who with her husband Allan MacDonald, settled in Antigonish, N.S. in 1829.