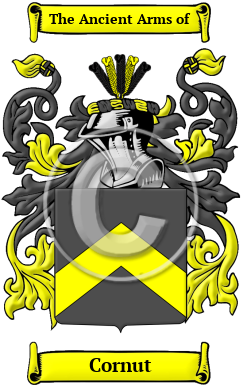 Early Origins of the Cornut family

The surname Cornut was first found in Cumberland at Corney, a parish, in the union of Bootle, Allerdale ward above Derwent.

Early History of the Cornut family

Distinguished members of the family include Victor Cornette, son of an organist, born at Amiens 1795, a musician of indefatigable activity. He entered the Paris Conservatoire in 1811, and studied composition under Lesueur. He served in the band of the 'Grenadiers tirailleurs de la Garde Impériale' in 1813 and 1814, and was at Waterloo; was professor at the College...
Another 58 words (4 lines of text) are included under the topic Early Cornut Notables in all our PDF Extended History products and printed products wherever possible.

Migration of the Cornut family