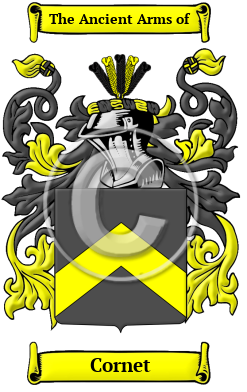 Early Origins of the Cornet family

The surname Cornet was first found in Cumberland at Corney, a parish, in the union of Bootle, Allerdale ward above Derwent.

Early History of the Cornet family

More information is included under the topic Early Cornet Notables in all our PDF Extended History products and printed products wherever possible.

In France, the name Cornet is the 571st most popular surname with an estimated 8,210 people with that name. [4]

Cornet migration to the United States +

Cornet Settlers in United States in the 18th Century

Cornet Settlers in United States in the 19th Century

Cornet Settlers in New Zealand in the 19th Century