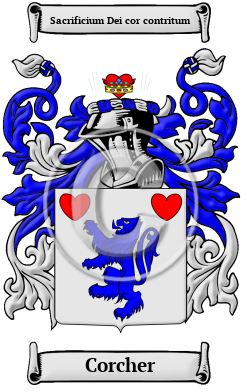 The name Corcher comes from one of the family having worked as a caulker, a person who waterproofed tubs, barrels, and ships. It is also possibly an occupational name for a person who made and sold a purple dye. However, that origin is in Ireland, and it is unlikely that it is connected to this Northern English name.

Early Origins of the Corcher family

The surname Corcher was first found in Lancashire, now part of the County of Cumbria where the family lived in Barrow-in-Furness, now a large industrial town and seaport community.

While the name has traditionally been understood to be a trade name, there is also a Norman influence as seen by Arnulf de Corcres who was listed in Normandy in the Mang. Rotuli Scaccarii Normanniae of 1180-1195. The same reference lists Geoffrey Chorger or Churger in England as listed in the Hundredorum Rolls (Rotuli Hundredorum) c. 1272. [1]

Early History of the Corcher family

Spelling variations in names were a common occurrence before English spelling was standardized a few hundred years ago. In the Middle Ages, even the literate spelled their names differently as the English language incorporated elements of French, Latin, and other European languages. Many variations of the name Corcher have been found, including: Corker, Coroor, Corcher, Corkar and others.

Notables of the family at this time include Adam le Corker, a prominent 13th century landholder in Yorkshire; James Corker (1636-1715), Benedictine monk, a native of Yorkshire; Maurus (James) Corker (1636-1715) was an...
Another 33 words (2 lines of text) are included under the topic Early Corcher Notables in all our PDF Extended History products and printed products wherever possible.

Migration of the Corcher family to Ireland

Some of the Corcher family moved to Ireland, but this topic is not covered in this excerpt.
Another 45 words (3 lines of text) about their life in Ireland is included in all our PDF Extended History products and printed products wherever possible.

Migration of the Corcher family

Families began migrating abroad in enormous numbers because of the political and religious discontent in England. Often faced with persecution and starvation in England, the possibilities of the New World attracted many English people. Although the ocean trips took many lives, those who did get to North America were instrumental in building the necessary groundwork for what would become for new powerful nations. Among the first immigrants of the name Corcher, or a variant listed above to cross the Atlantic and come to North America were : Elizabeth Corker who arrived in Virginia in 1635.