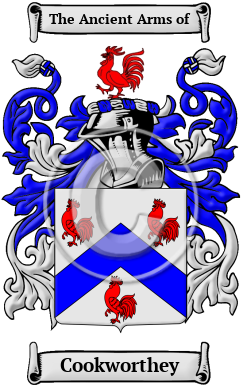 The illustrious surname Cookworthey finds its origin in the rocky, sea swept coastal area of southwestern England known as Cornwall. Although surnames were fairly widespread in medieval England, people were originally known only by a single name. The process by which hereditary surnames were adopted is extremely interesting. As populations grew, people began to assume an extra name to avoid confusion and to further identify themselves. Under the Feudal System of government, surnames evolved and they often reflected life on the manor and in the field. Lords and their tenants often became known by the name of the feudal territory they owned or lived on. Unlike most Celtic peoples, who favored patronymic names, the Cornish predominantly used local surnames. This was due to the heavy political and cultural influence of the English upon the Cornish People at the time that surnames first came into use. Local surnames were derived from where a person lived, held land, or was born. While many Cornish surnames of this sort appear to be topographic surnames, which were given to people who resided near physical features such as hills, streams, churches, or types of trees, many are actually habitation surnames derived from lost or unrecorded place names. The name Cookworthey is a local type of surname and the Cookworthey family lived in Devon, at the village of Coxworth.

Early Origins of the Cookworthey family

The surname Cookworthey was first found in Devon where they held a family seat as Lords of the Manor of Yarnscombe in that county. At the time of the taking of the Domesday Book in 1086 A.D. the estates of Yarnescombe (anciently spelt Hernescombe) were held by Robert from Baldwin the Sheriff of Devon and, conjecturally, the family name may be descended from this person although the Cornish source may predominate by their close relationship to the Cornish family of Trevalian. By the nature of an explanation of the meaning of the name, a "worthy" was one who held personal rights above and beyond the influence of the tenant-in-chief, in this case the rights to a roost of a cock, hens and chickens, and more importantly, the manure therefrom. All other roosts were the property of the Lords of the Manor. To be a worthy of any farm product meant a person of high distinction, next to the Lords of the Manor and usually succeeding to that position.

Early History of the Cookworthey family

Notable amongst the family at this time was William Cookworthy (1705-1780) an English Quaker minister, a successful pharmacist and an innovator in several fields of technology. He was the first person in Britain to discover how to make hard-paste porcelain, like that imported from China. He was the "founder of the Plymouth China Works, where the first true porcelain made in England was produced, and the productions of which are now most highly valued. Born at Kingsbridge in 1705, and left when quite a lad by the death of his father, who was a weaver, in very poor circumstances, he walked to...
Another 209 words (15 lines of text) are included under the topic Early Cookworthey Notables in all our PDF Extended History products and printed products wherever possible.

Migration of the Cookworthey family

An investigation of the immigration and passenger lists has revealed a number of people bearing the name Cookworthey: John and Jane Cookworthy who landed in New York state in 1822 with seven children. In Newfoundland the family settled in Grand Bank and later moved to St. John's..