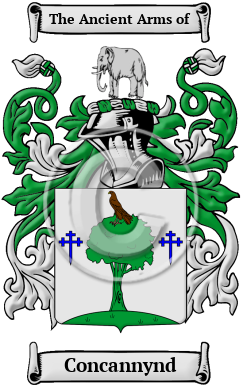 Gaelic, otherwise known as Early Modern Irish, was used in Ireland from around the year 1200 until the 18th century. It is from this language that we found the first references to the name Concannynd as O Concheanainn, possibly meaning "fair headed hound." The family descends from Cuceannan, who was killed in 991. Another reference, claims that the surname could have been derived from MacConceannain, and in this case it was derived from the Irish "conn," a man's personal name + "gan," which means without + "an," which means a "lie," collectively meaning "Conn the speaker of truth." [1]

Early Origins of the Concannynd family

The surname Concannynd was first found in Galway (Irish: Gaillimh) part of the province of Connacht, located on the west coast of the Island, and Roscommon where they claim descent from the Heremon kings, from the Ui Bruin and more specifically they were derived from Dermot, brother of Murias the 29th King of Connacht who was alive in the 9th century. They claim descendancy from the O'Connors, hence the similarity of the Coat of Arms which both depict a tree at the center point.

Early History of the Concannynd family

This web page shows only a small excerpt of our Concannynd research. Another 82 words (6 lines of text) covering the years 1640, 1690, 1749, 1732 and 1748 are included under the topic Early Concannynd History in all our PDF Extended History products and printed products wherever possible.

People who were accounted for by scribes and church officials often had their name recorded many different ways because pronunciation was the only guide those scribes and church officials had to go by. This resulted in the problem of one person's name being recorded under several different variations, creating the illusion of more than one person. Among the many spelling variations of the surname Concannynd that are preserved in archival documents are Concannon, O'Concannon, Cancannon, Concanon, Cancanon, O'Concanon, Connon and many more.

Another 38 words (3 lines of text) are included under the topic Early Concannynd Notables in all our PDF Extended History products and printed products wherever possible.

Migration of the Concannynd family

Irish families left their homeland in astonishing numbers during the 19th century in search of a better life. Although individual reasons vary, most of these Irish families suffered from extreme poverty, lack of work opportunities, and exorbitant rents in their homeland. Many decided to travel to Australia or North America in the hopes of finding greater opportunities and land. The Irish immigrants that came to North America initially settled on the East Coast, often in major centers such as Boston or New York. But like the many other cultures to settle in North America, the Irish traveled to almost any region they felt held greater promise; as a result, many Irish with gold fever moved all the way out to the Pacific coast. Others before that time left for land along the St. Lawrence River and the Niagara Peninsula, or the Maritimes as United Empire Loyalists, for many Irish did choose to side with the English during the American War of Independence. The earliest wave of Irish migration, however, occurred during the Great Potato Famine of the 1840s. An examination of early immigration and passenger lists has revealed many people bearing the Concannynd name: Patrick Cancannon arrived in New York State in 1811; Michael Concannon who arrived in Philadelphia in 1878; Edward, George, James, Michael, Timothy, arrived in Philadelphia or Boston between 1840 or 1870.