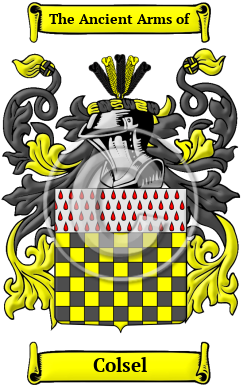 Cornwall, one of the original six "Celtic nations" is the homeland to the surname Colsel. A revival of the Cornish language which began in the 9th century AD has begun. No doubt this was the language spoken by distant forebears of the Colsel family. Though surnames became common during medieval times, English people were formerly known only by a single name. The way in which hereditary surnames were adopted in medieval England is fascinating. Many Cornish surnames appear to be topographic surnames, which were given to people who resided near physical features such as hills, streams, churches, or types of trees, many are actually habitation surnames. The name Colsel is a local type of surname and the Colsel family lived in Cornwall. Their name, however, is derived from the Old English word coll, which means hill, and indicates that the original bearer lived near such a landform. The redundancy in the name (hills hill) is likely a later addition after the initial word cole had fallen out of use and its meaning has been forgotten.

Early Origins of the Colsel family

The surname Colsel was first found in Cornwall where they held a family seat from very ancient times at Tremoderet. "In the church [of Higher and Lower Tredinneck, Cornwall] which is a plain Gothic structure, there is a handsome monument of stone, sustaining a recumbent figure of a knight in armour, with an inscription to the memory of Sir John Coleshill of Tremoderet, who died in 1483." [1]

Early History of the Colsel family

This web page shows only a small excerpt of our Colsel research. Another 117 words (8 lines of text) covering the years 1418, 1424 and 1427 are included under the topic Early Colsel History in all our PDF Extended History products and printed products wherever possible.

More information is included under the topic Early Colsel Notables in all our PDF Extended History products and printed products wherever possible.

Migration of the Colsel family

An inquiry into the early roots of North American families reveals a number of immigrants bearing the name Colsel or a variant listed above: John Coleshell settled in Virginia in 1660; Anne and William Cowlishaw sailed to Salem, Massachusetts in 1630.