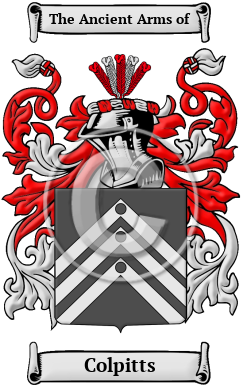 The ancestors of the Colpitts surname lived among the ancient Anglo-Saxon culture. The name comes from when they lived in Newcastle. The name means "at the coal pits," and is found in the area around the great coal mines in Newcastle and the surrounding area in Shropshire. [1] "I have observed this name about Newcastle-upon-Tyne. It was probably assumed in the first instance by a person resident near a coal-pit." [2]

Early Origins of the Colpitts family

The surname Colpitts was first found in the historic county of Durham, now part of Tyne and Wear in the Newcastle upon Tyne area. Early records of the family are rare. The first record we found of the name was a marriage record in London of Nicholas Collpotts and Katherine Tatham, (1576-1577.) Braund's Newcastle lists John Colepitts as a hoastman in 1720 (epitaph, St. Nicholas, Newcastle-on-Tyne); and George Colpits, of Killingworth in 1763. [1] Black has no record of the family in Scotland, so one can presume that the family remained in this area. Today Colpitts Grange is a village in Northumberland and Colpitt Lake is a lake near Halifax, Nova Scotia, Canada.

Early History of the Colpitts family

This web page shows only a small excerpt of our Colpitts research. Another 24 words (2 lines of text) covering the years 157 and 1576 are included under the topic Early Colpitts History in all our PDF Extended History products and printed products wherever possible.

Before English spelling was standardized a few hundred years ago, spelling variations of names were a common occurrence. Elements of Latin, French and other languages became incorporated into English through the Middle Ages, and name spellings changed even among the literate. The variations of the surname Colpitts include Colpitts, Coldpitts, Colquit, Colquite, Colquitt, Colquits, Collpotts and many more.

More information is included under the topic Early Colpitts Notables in all our PDF Extended History products and printed products wherever possible.

Colpitts Settlers in Australia in the 18th Century