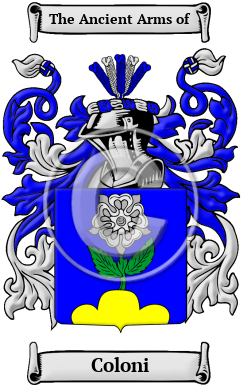 The distinguished surname Coloni can be traced back to the ancient and beautiful region of Sicily, which is located off Southwestern Italy and incorporates the island of Sicily itself, the area of Naples, and the southern part of the Italian peninsula. Although people were originally known only by a single name, it became necessary for people to adopt a second name to identify themselves as populations grew and travel became more frequent. The process of adopting fixed hereditary surnames was not complete until the modern era, but the use of hereditary family names in Italy began in the 10th and 11th centuries. Italian hereditary surnames were developed according to fairly general principles and they were characterized by a profusion of derivatives coined from given names. The most common type of family name found in the region of Sicily is the patronymic surname, which is derived from the father's given name. During the Middle Ages, Italians adopted the patronymic system of name-making because it perfectly complemented the prevailing Feudal System. In Italy the popularity of patronymic type of surname is also due to the fact that during the Christian era, people often named their children after saints and biblical figures. The surname Coloni was derived from the given name Nicola or Nicholas. The Italian name Nicola is derived from the Latin name Nicolaus, which means to win and laos, which means people.

Early Origins of the Coloni family

The surname Coloni was first found in at Lecce, the historic city in southern Italy, the capital of the province of Lecce and a port city located on the southern tip of the Italian peninsula in the 14th century, where Francesco Colaci was an architect.

Interestingly, Saint Deicola or Deicolus "(d. 625), was a native of Leinster and one of the twelve companions who, in imitation of the twelve apostles, attended St. Columbanus from Ireland first to East Anglia and then to France, where he arrived A.D. 589 or 590. On the foundation of the monastery of Luxeuil he appears to have continued with him as one of his monks until 610, when Columbanus, having been expelled from it through the intrigues of Brunehilde, grandmother of Theodoric, king of Burgundy, some of his monks accompanied him into exile. One of these was Deicola, but they had only proceeded two miles when it became evident that he was unequal to the journey, and he besought Columbanus to permit him to stay behind and retire to some solitude. His request was granted, and Deicola thus left alone, and forbidden by his master to return to Luxeuil, sought the depths of the forest. " [1]

Early History of the Coloni family

This web page shows only a small excerpt of our Coloni research. More information is included under the topic Early Coloni History in all our PDF Extended History products and printed products wherever possible.

Prominent among bearers of this surname in early times was Gennaro di Cola (c. 1320-c. 1370), an Italian painter of the Trecento; Cola di Rienzo (or di Rienzi) (c. 1313-1354), an Italian medieval politician and popular leader; Malteo Colaci, an intellectual during the 15th century; Agostino and Benedetto Colazza were priests in Velletri in 1506; Sante Colazza was priest of the Commune...
Another 62 words (4 lines of text) are included under the topic Early Coloni Notables in all our PDF Extended History products and printed products wherever possible.

Migration of the Coloni family