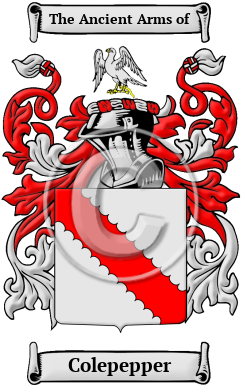 The saga of the name Colepepper follows a line reaching back through history to the days of the Anglo-Saxon tribes in Britain. It was a name for someone who worked as a spicer. The name is derived from two Old English elements, cul and pepper. It meant "pepper gatherer." [1] As spices were rare and expensive in the medieval period, this would have been a valued occupation.

Early Origins of the Colepepper family

The surname Colepepper was first found in Kent where the family descend from Culpepers of Bay Hall, Pembury, Kent. It is generally thought that the first record of the family was John de Colepepper (c. 1140) from Bay Hall, Pepenbury. His son, Sir Thomas de Colpepper (1170-c.1200) was Recognitor of the Grand Assize in Sussex. He died in Sussex at the age of 30. Bay Hall Manor was held by the family until 1480 when it was sold Humphrey Stafford, Duke of Buckingham.

Early History of the Colepepper family

Before the last few hundred years, the English language had no fast system of spelling rules. For that reason, spelling variations are commonly found in early Anglo-Saxon surnames. Over the years, many variations of the name Colepepper were recorded, including Colepeper, Colpepper, Culpeper, Culpepper, Colepepper, Colpeper, Collpeper and many more.

Migration of the Colepepper family

To escape oppression and starvation at that time, many English families left for the "open frontiers" of the New World with all its perceived opportunities. In droves people migrated to the many British colonies, those in North America in particular, paying high rates for passages in cramped, unsafe ships. Although many of the settlers did not make the long passage alive, those who did see the shores of North America perceived great opportunities before them. Many of the families that came from England went on to make essential contributions to the emerging nations of Canada and the United States. Research into various historical records revealed some of first members of the Colepepper family emigrate to North America: Henry Culpeper who settled in Virginia in 1663; Jonathan Culpeper settled in Virginia in 1646; William Culpepper settled in New England in 1634; Margaret Culpepper settled in Virginia in 1751..