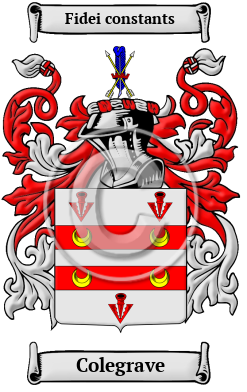 The distinguished surname Colegrave is Anglo-Saxon in origin. It is made up of two elements, both derived from Old English: "col," meaning "cold," and "graf," meaning "grove" or "thicket." It is likely that the original bearer of the name was someone from the north who lived near a large or well-known grove.

Early Origins of the Colegrave family

The surname Colegrave was first found in Oxfordshire, where the name is thought to have first emerged. The earliest known bearer of the name was Geo Colgrave, who was married in Oxfordshire in 1566.

Early History of the Colegrave family

Distinguished members of the family include Thomas Colgrave (b. 1640), a well-known lieutenant colonel in the British army; Francis Colegrove (c. 1667-c. 1759), English colonial immigrant, the first...
Another 28 words (2 lines of text) are included under the topic Early Colegrave Notables in all our PDF Extended History products and printed products wherever possible.

Colegrave migration to the United States +

Colegrave Settlers in United States in the 20th Century

Colegrave Settlers in Australia in the 19th Century